Pork Tenderloin is a great, easy recipe that is perfect for dinners with your family and friends. It doesn’t take long and it feeds several people. 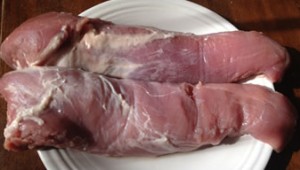 I start with: Squeeze out the excess air so the entire loin is submerged in the liquid. Place it in the refrigerator for 1 hour. Remove the loin from the marinade and allow the excess to drip off. Lay out a piece of aluminum foil big enough to create a foil boat.

Place the loin on the foil… And season it with: Bring the foil up and around the loin be sure to join the ends so no liquid will escape. Pour about ¼ of the marinade along the side the loin. Fire up the grill to 300 degrees and place the foil pack on the grate. I threw a chunk of apple wood on the fire to produce a little smoke. After 30 minutes remove the loin from the smoker, and place it on direct med. High heat. Let the loin cook for 2 minutes and roll it 45 degrees. Set the timer for 2 more minutes and baste each side of the loin with the liquid from the foil as it is turned. Continue cooking and turning until all sides have been seared for a total of 8 min. At this point when a thermometer is inserted into the middle of the loin it will be 140 degrees which is exactly where it should be.

Remove it from the grill and let it rest for 5-10 minutes before slicing. Since the pork tenderloin I bought came in a double pack I had an additional loin to play with, so I put to use a marinade pouch courtesy of the Jack Daniel’s goodie bag I brought home last month. It seemed like a good time to give it a try, so I placed the loin in the bag according to directions and let it rest in the fridge for an hour as well. To season this loin I used a Caribbean Jerk seasoning and granulated garlic powder. It went in the same style foil pouch with a little of the Jack marinade poured alongside. Then the loin went on the 300 degree smoker for 30 minutes. I finished it the same way med. High heat for 2 minutes on each side basting the Jack marinade (from the foil) over it at each turn. There too strong of a mesquite flavor in the Jack Daniel’s “in the bag” marinade for my taste. Everyone in my house preferred the original method. These pork tenderloins made a great dinner that was quick and easy to prepare. And they taste so good…