I’ve used this recipe many times in Ancillary Beef categories at bbq contest and have had some great success with it. Normally the tenderloin is the most expensive cut of beef you will find, so the last thing you want to do is mess it up. For me, that means over cooking it. I can’t stress enough how important it is to have a quality meat thermometer when you’re preparing this cut. You can buy a trimmed Beef Tenderloin from your local butcher, but one way I’ve found to save money on this cut is to buy it whole in the bag. It comes in a cryovac package often called the “Pismo” cut. Also you’ll want to look for choice grade at least. Sams or Costco always has these in stock and they run about $11.99 lb. The tenderloin I cooked for this newsletter weighed right at 6lbs. The first thing you’ll need to do is trim the tenderloin. The tenderloin has a good bit of Silver Skin and connective tissue on it. Use a sharp filet knife to carefully cut underneath the silver skin and slice along the top of the filet. You can use your fingers to separate the “chain” from the actual tenderloin. It’s the long strip of connective tissue that runs along the bottom side of the loin. Pull the fat back and use your knife to trim it away. Don’t throw this piece away because it can be ground into some really good burger or you can trim it further into some really good stir fry meat. Next take off the piece of meat on the very top of the tenderloin. I call this area the “head” It can be cut into steaks or used for stir fry meat as well. Once you have the silver skin removed the tenderloin is ready to marinade.

For the marinade, I use a bottle of Moore’s Original Hickory Marinade to soak the tenderloin for about 2 hours in the refrigerator. I like the flavor it gives beef and it’s not too salty like some of the commercial marinades out there. You can find Moore’s at your local grocery store on the sauce isle.

Worcestershire (1 cup) and Soy Sauce (1/2 cup) can be substituted if you have a hard time locating it. After 2 hours remove the tenderloin from the marinade and let the excess drip off. The next step is to season the outside. I used Butcher BBQ’s Steak and Brisket seasoning. It’s a combination of salt, lemon pepper, garlic, herbs, and a touch of sweetness to balance out the flavors. Let the tenderloin sit out at room temperature after seasoning just long enough to fire up the grill. For the cooking process you’ll need a 2 zone fire. I set up my Weber kettle with a chimney of hot coals on one side and a drip pan on the other. As soon as the grill is hot, it’s time to cook.

Place the tenderloin over the hot coals and set a timer for 2 minutes. Turn the loin and repeat every two minutes until its’ seared on 4 sides. (Total of 8 min.) Move the tenderloin to the cool zone. At this point check the internal temperature to see where it is. This one was was sitting right at 100 degrees, so it needs 10-15 more minutes before it’s done. You want to place the lid on the grill to control the heat and set a timer for 10 minutes. Beef Tenderloin is best served medium rare – 130 degrees. It should have a warm red center and firm feel on the outside. You can cook it longer but I gotta warn you that it’s going to take away the beef flavor and your going to lose tenderness the more it cooks. After 10 minutes, I checked the internal temperature and it was right at the 130 degree mark in the center. Now all that’s left is to let the tenderloin rest for 10-15 minutes before slicing.

The meat needs this time to stop the cooking process and absorb the juices that are pushed to the outside. Like any meat, you will lose moisture (flavor) if you cut into it right away. When I turn in beef tenderloin for a contest, I slice it into 1” filets and arrange on a bed of parsley or lettuce. I’ve also wrapped the loin in bacon to add some extra flavor. For me I like the flavor that develops from the searing process, and it doesn’t get that if it’s wrapped. So when I’m cooking at home, we just slice it and serve. 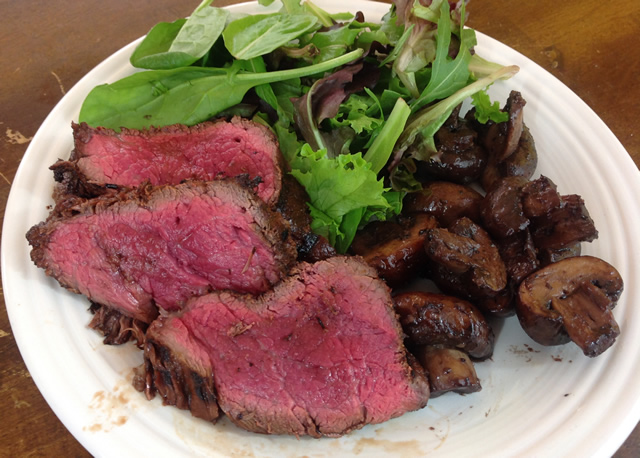