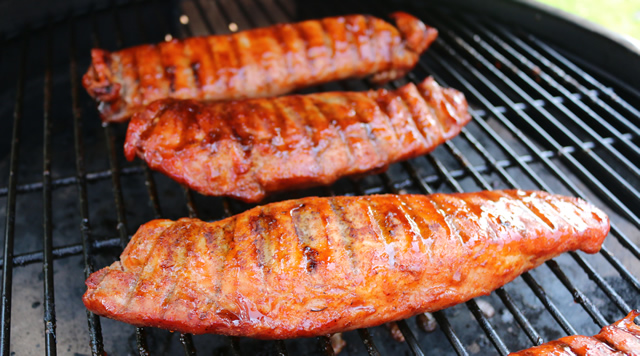 I’ve done several recipes for pork loin… but this recipe is for a true pork tenderloin. 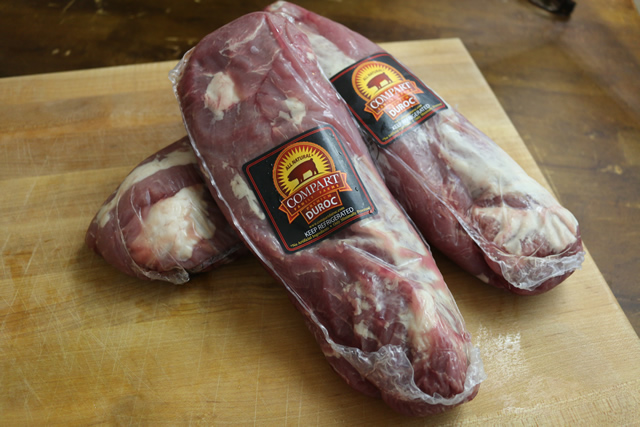 The true tenderloin runs alongside the backbone – and it’s a lot smaller (and a lot more tender) than the pork loin. It’s often called the pork fillet too… that’s how good it is! There are a lot of different ways to cook a pork tenderloin, but I decided go the BBQ route. I took the tenderloin and rubbed it, injected it and cook it on my grill at 250 degrees. Check out the video below: To start I rubbed my 4 pork tenderloins with Smokin’ Guns Sweet Heat rub and then injected with Butcher’s Open Pit Pork Injection mixed with apple juice. After that, I got my BGE grill fired up, added a few chunks of cherry wood and stabilized it on 250 degrees. I didn’t get too far away because these pork tenderloins are pretty small and the worst thing you can do is overcook them. I’m shooting for an internal of 145 when it’s complete – but I take them off the smoker at 138-140 internal because I’m going to get that additional degrees in the carryover when it rests.

And with this recipe, I wanted to give the pork tenderloins a mild, sweet glaze right before I took them off the smoker. So I cooked them to an internal of 130 and the brushed on The BBQ Sauce. Use any kind of sauce or glaze you want at this step, just make sure it goes with the rub and injection really well. Once the Grilled Pork Tenderloins had glazed for a few minutes and they were temping between 138 – 140 internal, it’s time to take them off the grill and let them rest. After 10 minutes, it’s time to slice and get to eatin’. You can serve these tenderloins just like they are – right off the cutting board. But you can also use them for pork sliders. Either way they make a great dish for a football party or BBQ.