This is how to Smoke Pork Belly – just like you would get out of your whole hog (the bacon part) without smoking the whole hog. This smoked pork belly recipe will melt in your mouth. mmmm…. Bacon! For a while now, I’ve been wanting to smoke pork belly on my backyard smoker. The only time I get true bacon is off a whole hog, and I wanted to duplicate that “whole hog” style bacon on a smaller scale – something anyone can do. So I went and bought myself a case of pork bellies earlier this week. I had 5 bellies total. (I’ve got some homemade, cured bacon in the works – and I’m going to share that too… so be on the look-out). But today it’s all about un-cured, slow-smoked, melt-in-your-mouth goodness that is Smoke Pork Belly. The pork belly I had averaged about 12lbs – which was a little too large for my UDS. So I trimmed it down to about a 6lb slab. This was much more manageable, provided plenty of meat, and left me with some smaller roasts to play with later. (I’m thinking braised pork belly)

I left the skin on to hold in moisture and flavor – and to protect the meat while it was cooking in the smoker. Then I gave the skin a good coating of vegetable spray to prevent it from burning and give it that golden color. Next, I slathered on a light coat of plain yellow mustard and dusted on a good coating of Killer Hog’s The BBQ Rub. The pork belly has about 50% fat internally – and that’s massive flavor. But I also wanted to inject it to add even more flavor. The thicker parts of the belly did really well taking the injection, but I did have a little trouble in the thinner areas. The goal was to use about a 12oz of injection in the whole thing. Here is the Smoke Pork Belly injection recipe: Once it was seasoned and injected, it was time for the smoker which was already sitting at 235 degrees. I threw on a couple pieces of peach and cherry wood for smoke flavor. 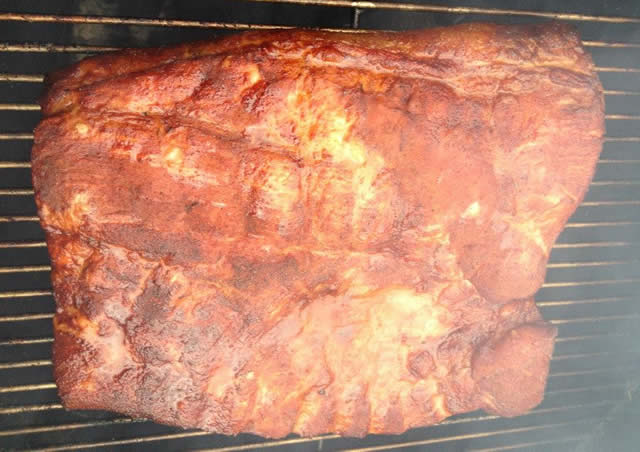 The smoke pork belly went on – skin side down – for 4 hours. At that point it had that perfect, mahogany color I was going for. So it was time to wrap. For my wrap I just simply re-seasoned with a little more Killer Hog’s The BBQ Rub. and added about ¼ cup of apple juice just for a little added moisture. The wrapped smoke pork belly went back on the cooker for another 3.5 hours. At that point I gave it a test probe. My skewer slid in just like a hot knife through butter and I knew it was done. In the thickest part of the belly the internal temp was about 198 degrees. At this point, I took it off the cooker and unwrapped the smoke pork belly to release the steam and stop the cooking process. I let it set for about 10 minutes and then closed the foil and put it in a dry cooler to rest for about an hour. After my hour rest, I carefully unwrapped it and placed it on a wire cooling rack for glazing. This just makes moving it around much easier.

For my glaze I used Killer Hog’s The BBQ Sauce. Not only is flavor awesome but it gives meat that color and sheen that just makes it pop. The glazed belly went back on the cooker for 45 minutes – just long enough to let the glaze set without burning. I always keep a careful eye on things at this point. Once the glaze was set, it was time to get down to business. What I done truly amazed me. I set out trying to re-create that ‘whole hog bacon’ without having to cook a whole hog… and the outcome was dead-on. 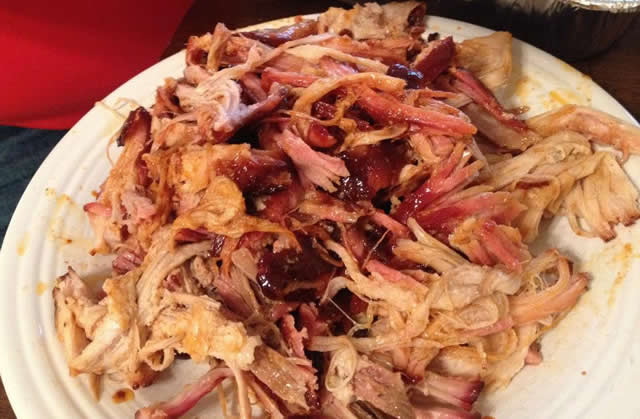 This was true, whole-hog style bacon that any judge would drool over. My only regret is that I didn’t do 2 of them because when everyone found out that I was cooking bacon, it started disappearing. Malcom Reed Connect on Facebook Follow me on Twitter Subscribe to my YouTube Channel Find me on Google+ Follow me on Instagram Smoke Pork Belly