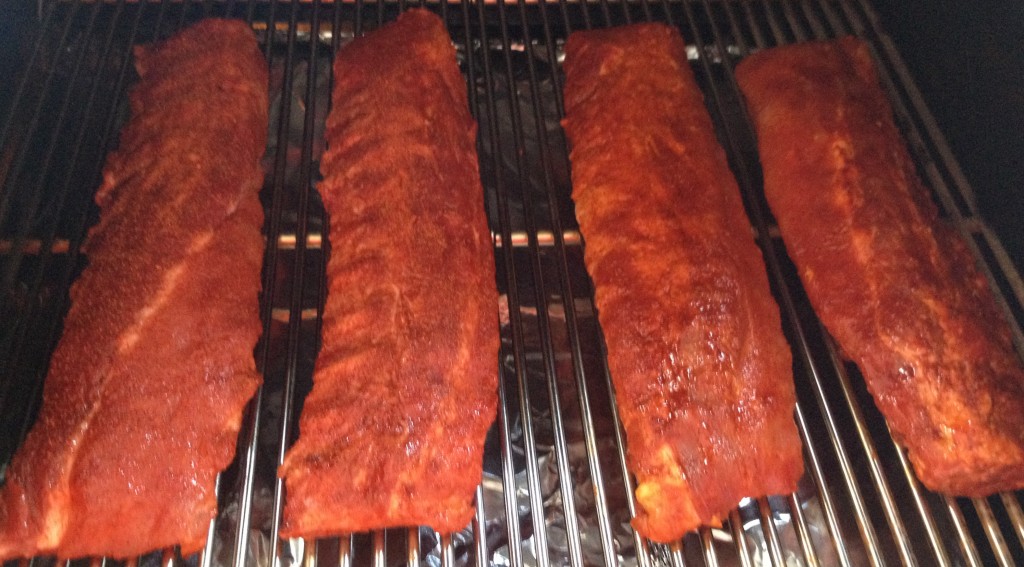 This past weekend I had the chance to cook on a pellet smoker for the first time. If you’re not familiar with pellet cookers, they run off small, compressed “pellets” of 100% wood. There’s no filler or other junk to worry about, so what you get is pure, clean smoke. I have to admit that I was a little leery of a pellet smoker producing the same competition quality meat that I get with charcoal and wood, so I was excited about putting the Yoder to the test. Firing up the Yoder and controlling the temperature is probably the best feature of this smoker. It’s literally “set and forget”. Once you have pellets in the hopper, it’s as easy as flipping a switch, pressing start, and setting the target temperature. The Yoder came up to 235 in about 15-20 minutes, and it was ready to roll. Ribs were the first meat that I choose to cook on the Yoder because I wanted to see just exactly how much smoke flavor the pellets would infuse into the meat. Ribs on the Yoder Smoker

I’m a firm believer in a little smoke goes a long way when it comes to competition barbecue. It’s easy to over smoke a piece of meat, and that’s one thing that you can’t change once it’s done. Ribs are a challenge on any smoker not only to get the tenderness right but due to their thickness (or thinness I should say) they can absorb too much smoke and turn out bitter. The ribs I selected for this cook were 2.5lbs and down loin back ribs. I had my butcher cut them down on each side to square the racks and remove any fragments left from the processor. Two of the slabs were prepped my normal comp style, slathered with a little mustard and dusted with Killer Hogs The BBQ Rub. For the other two racks, I had a pre-rub that I wanted to try. It went on both sides first, and after 5 minutes. I applied The BBQ Rub. Ribs getting a glaze of The BBQ Sauce

All four racks went on the Yoder at the same time. I stuck to my normal basting schedule of every 45 minutes. I did take note of the smoke that the Yoder was producing. It was light and blue just like good smoke is supposed to be. Also, the cherry pellets gave off a terrific aroma. The only thing missing was a little sweet onion in the air. After 2 hours the ribs had all of the color that I wanted, so it was time to wrap. I go with a good dose of margarine, brown sugar, & honey inside the foil. Then it’s back on the smoker to tenderize. I always like to check the ribs about 1 ½ hours into the wrap stage just to get a feel for the tenderness. The last thing I want is mushy ribs, so it’s better to check than guess. These ribs still needed a little longer, so I gave them 30 more minutes. At that point all four racks came inside, and I vented & drained the juices from the foil to stop the cooking process. Total cook time at this point was 4 hours at 235 degrees. For the final glaze I used our competition sauce…Killer Hogs The BBQ Sauce. Just like The BBQ Rub. it was created not just for great flavor but also final appearance of the meat. Everyone knows that judges eat with their eyes first! The ribs went back on the smoker once both sides were sauced. This is where I felt a little nervous. At this point on my smokers, there would be absolutely no smoke coming from my stacks. Charcoal would provide the heat because I don’t want any smoke flavor to build up on the outside of the meat. The pellets in the Yoder are producing heat but they’re still giving off smoke. I kept a close watch on the ribs checking them every 15 minutes for darkness. After 45 minutes the glaze had set, and there wasn’t any problem with the sauce over caramelizing.

The final appearance of these ribs was competition worthy and the Yoder did one heck of a job maintaining heat and producing just the right amount of smoke. I was really surprised at the smoke ring and taste. The level of smoke flavor was right on the money. Now I know how those guys using pellet smokers are racking up the trophies! Malcom Reed Connect on Facebook Follow me on Twitter Subscribe to my YouTube Channel Find me on Google+ Follow me on Instagram Competition Rib Recipe