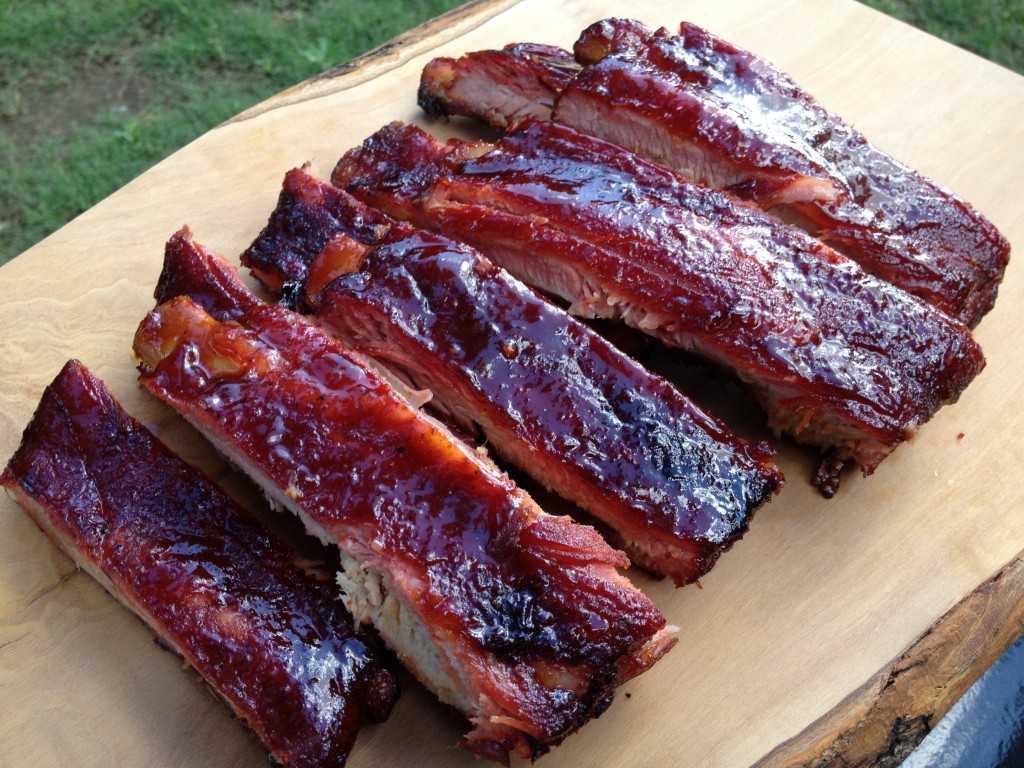 Had to cook something great for Memorial Day… so I fired up the grill and smoked some St. Louis Spare ribs. So here is my full recipe for St. Louis Spare ribs and a little video too: St. Louis Spare ribs are simply spare ribs with the brisket bone removed. They come from the belly section of the hog, so they contain a little more fat than loin ribs… but everyone knows that fat = flavor. You can buy the entire slab of spare ribs and trim it into St. Louis cut ribs at home, but you can also find them pre-trimmed at most grocery stores. The ribs I cooked came from Kroger and were already cut. Once out of the package there’s a little work that needs to be done. Flip the St. Louis Spare ribs over and trim off the flap of meat right against the bone, also remove the membrane. It can be a little tricky on spare ribs. What I do is use a butter knife to gently raise the membrane until I can get a finger under it. Then use a paper towel for grip and slowly pull the membrane off. Sometimes it will tear; just keep working at it until all of the it is removed. (Loin back ribs are much easier to skin) Also, if there’s any large deposits of fat underneath the membrane, I scrape it off. Now the ribs are ready to season. The first thing I apply is a good coat of All Purpose seasoning. It’s basically a combination of salt, black pepper, and garlic with a few other herbs for a base flavor. Then squirt on a layer of Yellow Mustard for a binder. This will help the rub stick to the ribs as it cooks.
Once the mustard is slathered on both sides, apply Killer Hog’s The BBQ Rub. to each side. Let the ribs rest for a few minutes while the smoker is coming up to temperature. For these ribs I’m using my Yoder pellet grill running with BBQr’s Delight Cherry pellets. It’s a mild, sweet flavor that goes great with ribs. I set the temp to 235 degrees and in 20 minutes it’s ready to roll. Place the ribs on the smoker and let them roll for 45 minutes. At this point it’s time to baste. I don’t want them to get too dry. For the St. Louis Spare ribs baste I mixed: Pour all of the ingredients into a squirt bottle and shake to combine. At each 45 minute mark, spritz the ribs with the baste mixture and apply a touch more of the dry rub. At this point you’re building layers of flavor on the ribs.
After 3 hours of smoke it’s time to wrap the St. Louis Spare ribs. I don’t want them to get too dark or develop an over-smoked flavor. For wrapping the ribs you’ll need heavy duty aluminum foil. I’ve tried the cheap stuff and it just won’t cut it. Tear off a large strip of foil, lay the ribs meat down in the center, and drizzle with Parkay Margarine. Sprinkle brown sugar over the parkay and drizzle with honey. Flip the ribs over and do the same for the top side. Bring the foil up and over the ribs, then flip the rack over. Fold up the sides and it will create a tight seal. Place the St. Louis Spare ribs back on the smoker and check them again in 1 hour. At this point they should be getting tender. Carefully open the foil and tug on the bones a little. If it feels as if the bone can be removed with a little more force, than the ribs are right where you want them. Sometimes it requires a little more time in the foil, so you just have to watch them close. If you do want to take an internal temperature, it should be around 190-195 degrees. Now that the St. Louis Spare ribs are tender it’s time to set a final glaze. Carefully return the slabs back to the smoker. I’ve found that it’s easier to place the ribs on full size wire cooling racks. It makes for maneuvering them back and forth easier. You can find these racks at local restaurant supply stores or online.
For the glaze I used Killer Hog’s The BBQ Sauce mixed with a little apple juice. Spread it evenly on both sides of the ribs and let the glaze cook on for about 30 minutes. At this point you really need to watch it because the sugars in the glaze can turn dark and burn quick. I check the ribs about every 10 minutes just to make sure it’s not over caramelizing. Once the glaze has set, it’s time to pull the St. Louis Spare ribs off. They’re ready to portion at this point. Cut them into one bone pieces if you’re going to serve them immediately, or you can wrap them in foil and place in a dry cooler if you need to hold them for a little while. Hope everyone has a great Memorial Day holiday! Malcom Reed Connect on Facebook Follow me on Twitter Subscribe to my YouTube Channel Find me on Google+ Follow me on Instagram St. Louis Spare ribs