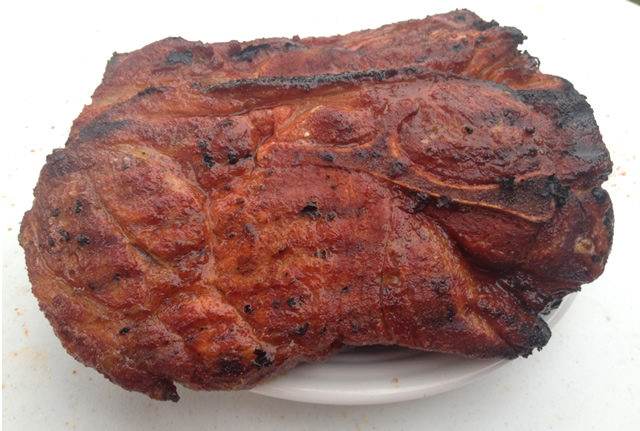 Here is a Pork Steak recipe that’s packed with flavor. If you’re not familiar with “pork steak” it’s basically a sliced Boston Butt. I shot a video of this recipe… Most any butcher will slice the pork butt for you just tell them you want it cut into pork steaks. I get them cut about ¾” thick, and an average size butt yields about 9-10 good size pork steaks.
To pack some flavor into these pork steaks I use an “Apple Brine”. Here’s the recipe: Bring the apple juice and apple cider vinegar to a slow boil and add the brown sugar, salt, and rub. Stir the mixture until the sugar dissolves. Remove it from the heat and allow it to cool to room temperature. I use a 2.5 gallon Hefty brand slider bag to brine the pork steaks. Place the meat into the bag and pour the room temperature brine over it. Be sure to place the bag into a shallow pan or baking dish just in case it leaks. The pork steaks need at least 4 hours in the brine, so put them in the refrigerator or in a cooler on ice. After 4 hours remove the steaks from the brine and allow the excess liquid to drain off. I pat them lightly with a paper towel to remove the moisture. You should be able to tell that the brine has soaked into the meat, the color will be slightly darker.
Next apply a good coating of The BBQ Rub. to the outside and let them sit on the counter for a few minutes while the smoker is coming up to temperature. You want the smoker at 275 degrees for these steaks. I also used apple for smoke to keep the flavor profile going.
Once the smoker is up to temp, put the steaks on the grill. Every 30min give them a flip and keep cooking. The total cook time should be about 1 ½ hours or until an internal temperature of 165-170 degrees is reached.
The pork steaks have a lot of internal fat that needs to break down but don’t worry it will still be really juicy in the end. As soon as the hit the target temperature, pull the steaks off the grill and give them 5-10 minutes to rest. You’re ready to eat at this point!
Malcom Reed Connect on Facebook Follow me on Twitter Subscribe to my YouTube Channel Find me on Google+ Follow me on Instagram