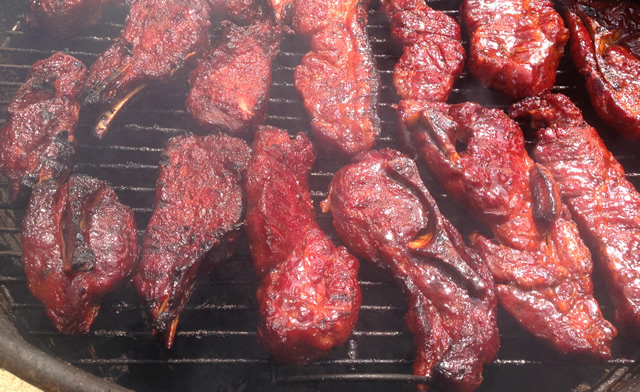 When you hear the word “Ribs” chances are you immediately think of a big slab of Spare or Loin Back ribs, smoked to sweet perfection. Today I want to share with you another type of rib… Country Style. In the competitive BBQ world we’re not allowed to turn in country style ribs, but don’t let that stop you from knowing how to cook them. When done right, Country Style Ribs rival the best bbq you can find. I recently had a lesson in the differences of Country Style Ribs from my favorite butcher, Cary owner of Raymon’s Meat Market. Anytime I have a question about meat cutting, Cary is my go to man. There are two types of pork cuts that are referred to as “Country Style Ribs”. The term came about a long time ago when country people didn’t have access to electric saws or fancy equipment to process pork. The basic tools were butcher knives, hatchets, and the occasional clever. A lot of the meat they were processing was taken off the carcass whole and the parts that were left were cut with the tools they had.
The “Country Rib” was the term given to a portion of meat at the end of the loin. In this area there are still a few rib bones after the traditional Spare and loin ribs are removed. This end of the loin is removed whole, bones intact, and then split into the country rib. What’s left is an almost rectangular piece of meat that can be cooked on all four sides. This makes it idea for the BBQ grill. The other cut of country style ribs isn’t a rib at all. In fact it comes from the butt portion of the shoulder. Meat cutters brought about this cut to make a little more money off the Boston Butt after it’s been trimmed. The first few inches of the butt are cut about 1” thick and this portion is split in half creating the shoulder cut country style rib. You may also see it called “Western Ribs” depending on where you live. If the slices are left whole you’ll have pork steak. Both cuts make excellent BBQ as long as you know how to cook them. This is my favorite way to smoke Country Style Ribs: For this recipe I bought both Loin cut and shoulder cut Country Ribs about 3-4lbs of each. The first step is the seasoning. Layer on a combination of Salt, Black Pepper, and Garlic powder on all sides and follow that up with a good dusting of The BBQ Rub. (or your favorite rub). Let the seasoning work on the meat for a few minutes while you start the smoker. 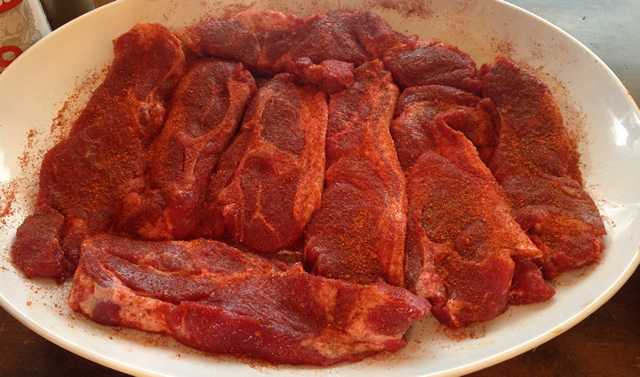 I fired up my UDS for this cook, running it with two open vents. The temp is in the 275 range if you’re using another type cooker. For smoke I threw on 3 chunks of Fruita Peach wood. It’s a sweet, mild flavor that’s great on ribs.
After 30 minutes, the UDS is ready to cook. This is just enough time for the rub to draw out a little moisture from the ribs; and to allow some of the seasoning to penetrate into the meat. The cooking process is pretty simple. First they get smoked for 1 ½ hours. Half way through this process give each piece a flip to ensure even cooking. You can check the internal temperature at the 1:15 minute mark. When it hits 150 degrees, that’s about all the smoke these ribs need. 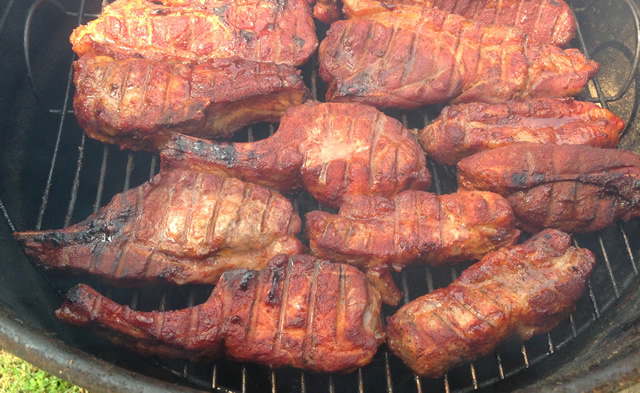 The second part of the cooking process is the “braise”. In a small aluminum pan pour ½ cup of pineapple juice and mix in The BBQ Sauce. The amount is just eyeballed but it’s probably close to 1 cup. The pineapple juice thins the sauce a little and helps tenderize the meat. Cover the pan with foil and place it back on the smoker. Let the ribs cook for another hour and check the tenderness. It’s more about feel hear than final temp. Your thermometer should easily slide into the meat with little or no resistance. The temperature should be around 195 degrees.

At this point the Country Ribs are cooked but there’s one final step. Remove each section from the pan and place back on the grate of the cooker. Brush or mop each side with The BBQ Sauce and let it caramelize for 3-4 minutes on each side. Once you see the sauce bubbling and slightly turning colors, they’re done.