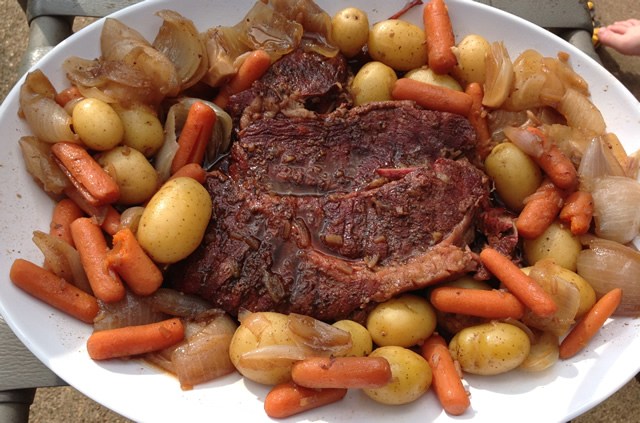 Nothing says down home cooking like a pot roast. I know growing up at my house we had pot roast for dinner at least once a month. Typically pot roast is prepared either in a crock-pot or roasting pan in the oven, but I’m taking it outdoors to the smoker. Pot Roast for me is Beef. Any cut of beef can be used, but the cheaper cuts tend to make the best pot roast. The cut I use is called Chuck Roast. The Chuck Roast has plenty of extra fat which gives the meat more flavor and it stands up well to long braising times.

For this recipe I bought a 3lb Chuck Roast which is more than enough for a family meal. The first step is to season the meat. I used my AP seasoning to create a base coat of flavor. AP Seasoning: Dust the outside of the roast with a good coat of the AP seasoning. I also add a layer of Montreal Steak seasoning because I like the flavor it brings to beef. Montreal is a great final layer for any cut of beef on the grill. I use it on brisket, steaks, or any red meat. Let the roast sit for a few minutes, so the seasoning has time to work on the meat. Meanwhile it’s time to fire up the Ugly Drum Smoker with a basket of charcoal and a good chunk of pecan wood. Pecan produces a mild smoke that goes great with beef. It doesn’t take much at all. Once the cooker hits 250 it’s time for the chuck roast to hit the grill. It goes right on the rack above the hot coals. Allow it to cook, so it browns on both sides (not charred) and it takes about 30 minutes per side. This also gives the meat time to absorb the pecan smoke. While the meat is smoking, I mixed up a braising liquid of concentrated beef base and water. You can find similar products on the soup isle in your local grocery store. The brand I used came from Restaurant Depot; it’s called Empire’s Royal Au Jus base. Beef Base can be used for Soups, Stocks, or Sauces but it makes a great braising liquid. Add 1/8 cup of the base to 48oz of boiling water and whisk. It’s simple to put together and it brings a ton of flavor to the roast. Once the meat is browned transfer it into a ½ size Aluminum pan and add enough braising liquid to come up about ½ way on the meat. I also added 1 cup of Red Wine to the liquid to fortify the flavors. To add even more “pot roast” flavor I topped the roast with 1 packet of Lipton Onion Soup Mix. Cover the pan with aluminum foil and return it to the smoker. You can’t have pot roast without vegetables, but don’t add them right away. The roast needs an hour head start; if you add the vegetables too soon, they’ll overcook. I like to use onions, potatoes, and carrots but feel free to add your favorites here. Mushrooms, Celery, Whole Green Beans, or anything that can stand up to a long cook time works great. Once the vegetables are added to the pot roast, cover the pan and continue to cook for 2 more hours. Keep the heat consistent (250 degrees) and kick back.

After two hours, check the roast for tenderness. I don’t worry with a meat thermometer at this point. It’s all about being “fork tender”. When the roast falls apart with the twist of a fork it’s done. The broth is infused with the smokiness of the meat and the vegetables soak up all the goodness. You’ll want to make sure they’re fork tender too. Bring the roast inside and transfer it to a serving platter. It doesn’t hurt to let it cool for a few minutes because it will be extremely hot. Ladle some of the beef jus/drippings over the roast and vegetables to keep everything moist and the remainder is used for making brown gravy. You can’t have pot roast without rice and gravy! 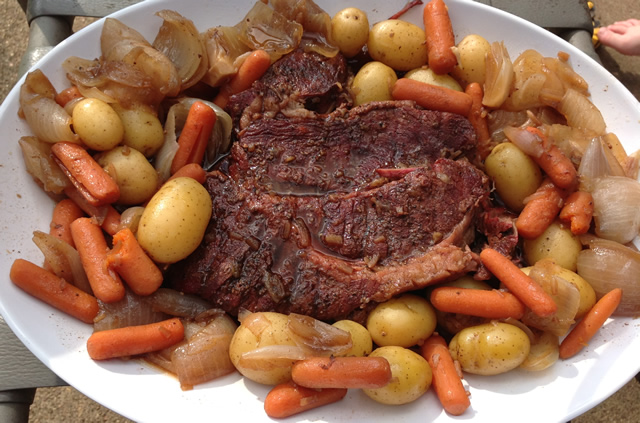 To make the gravy melt 3 Tablespoons of Real butter in a sauce pan. Add 2 Tablespoons of flour and whisk for 1 minute over medium heat. Pour in 2 cups of the Au Jus whisking constantly. It will thicken as it comes to a boil. Remove from the heat and serve. Pot Roast will never be the same once you’ve had it on the smoker! Malcom Reed Connect on Facebook Follow me on Twitter Subscribe to my YouTube Channel Find me on Google+ Follow me on Instagram