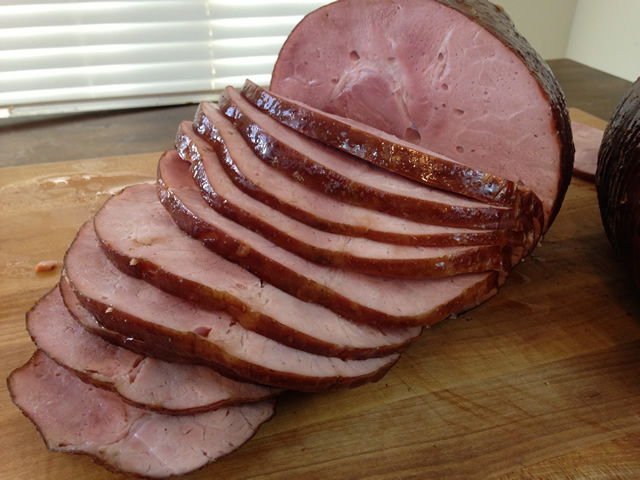 In our home the Easter table is anchored by a large platter of freshly smoked ham. That duty seems to always fall on me, and you know I have several recipes that never fail to deliver. Toady I’m sharing my recipe for Smoked Pit Ham. What is a Smoked Pit Ham you might ask? According to one of the larger meat packers Pit Ham stands for Partially Internally Trimmed Ham. This simple means they remove the bone and some of the internal fat from the middle of the ham, then tie it all back together and smoke it. Most often you’ll find Pit Ham in the deli case because it’s ready to eat right out of the package. Often called Country Pit Ham, it is sold by the pound in whatever thickness you desire. Pit ham makes a mean Ham & Cheese sandwich! You can also reheat these hams whole and serve as the main course for any meal. The packaging suggests heating the ham at 275⁰ in the oven until it reaches an internal temperature of 140 degrees. I’m sure they meant “Smoke It” or at least that’s how I read it! For this recipe you’ll need an 8-10lb Pit Ham. You can get these from your local supermarket should have other brands like Smithfield or Farmland just make sure it says fully cooked pit ham on the package. To smoke or “reheat” this ham you’ll need some type of bbq grill or smoker. I used my pellet grill with pecan BBQr’s Delight pellets for fuel, but any smoker or grill set up for indirect heat will work. The goal here is to hold a steady 275 degrees and have a light smoke rolling on your Smoked Pit Ham. Remember Pit Ham has already been smoked once, so we’re just warming it up in a smoked environment. I call it “Double Smoking”. Remove the Pit Ham from the packaging and place it on the smoker. It’s that easy, no seasoning or rub required. You can cut slits into the outer skin if you like but I like the presentation without it. It will take about 3 ½ hours for the Smoked Pit Ham to reach 140⁰ internal. After 1 hour of smoking it’s a good idea to use a probe thermometer to monitor the temps, and just keep the cooking temperature steady. I like to use the DOT (probe thermometer). To really set this ham off I use a glaze at the very end. Here’s the recipe for the Smoked Pit Ham glaze: – ½ Cup Light Brown Sugar – ½ Cup Honey – ¼ Cup Coca-Cola – 2 Tbsp Dijon Mustard – 2 tsp Killer Hogs The BBQ Rub Add all of the ingredients in a bowl and whisk. Pour into a squeeze bottle for use. When the Pit Ham reaches 125⁰-130⁰ internal, it’s time to glaze. Squirt or brush the glaze over the top and sides of the Ham. The heat will melt the glaze and cause it to run all over the outside. The glaze needs to cook on for 30-45min and at this point the Pit Ham should be 140⁰. Once the Smoked Pit Ham gets close go ahead and get it off the smoker. You don’t want to go over 140 because it can dry the ham out. I say it’s best to be a few degrees under here than over. Let the Pit Ham rest a few minutes before slicing for a juicer product. This is one ham that you can wait to carve at the table. All you need is a long blade and you’ll have picture perfect slices waiting to go on people’s plates. You’ll also notice that there’s not much loss with this ham, so one 8-10lb Smoked Pit Ham will easily feed 20 people. This Easter when you’re gathered with your families give thanks to God and remember why we celebrate the holiday. Hope everyone enjoys this Smoked Pit Ham recipe! Malcom Reed Connect on Facebook Follow me on Twitter Subscribe to my YouTube Channel Find me on Google+ Follow me on Instagram Smoked Pit Ham