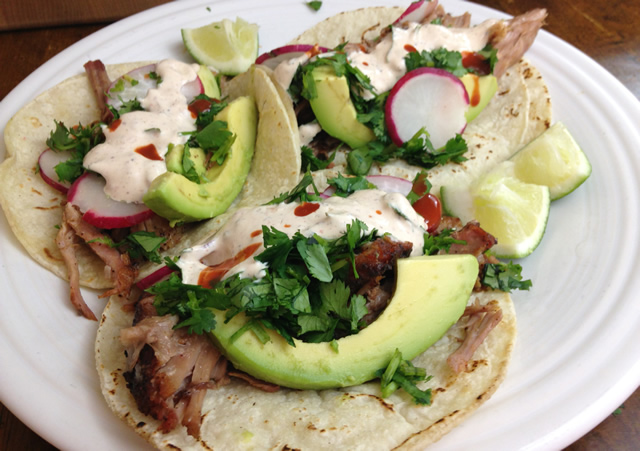 I love Pork Carnitas… so I decided to do my version using pulled pork. The traditional way of cooking carnitas is to braise pork shoulder in lard or oil until it’s falling apart, then crisp the chunks of pork and make tacos. My version is a little different because I want to incorporate the smoker into the cooking process to really give the meat some taste. 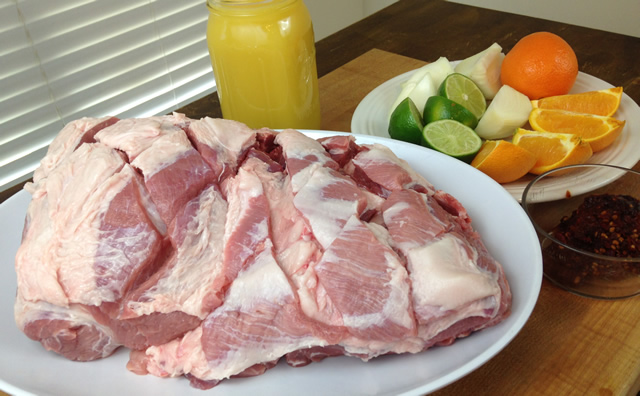 I start this recipe with a 7-8lb boston butt cut from the top portion of the pork shoulder. Instead of trimming the fat off the pork, I cut slits diagonally across the fat cap going in opposite directions. This creates more surface area for the seasoning to form bark and the fat gets crisp and delicious! For the first part of the recipe I want to develop some flavor inside the meat, and to do this I use a marinade to soak the butt overnight. Here’s the recipe for the Marinade: – 32oz Orange Juice – 5 Chipotle Peppers in Adobo Sauce (about ½ small can) – 1 Orange quartered – 2 Limes halved – 1 Onion quartered Place the Pork Butt on a large platter and season all sides with my Salt, Pepper, Garlic. For a simple ratio use 1 part salt, ½ part granulated garlic, and ¼ part ground black pepper. Make sure to sit the pork butt fat side up. You should see the score marks in the fat cap. Chop the Chipotle Peppers and spread over the top. Be sure to get it into the crevasses created by scoring. Next you’ll need something big enough to hold the pork butt and the marinade. I use 2 ½ gallon zip top bags you can find at the supermarket. The pork butt goes into the bag and then orange juice and onions. Squeeze the lime and lemon quarters into the bag as well. Get as much air out of the bag so the pork butt is covered and place it in the refrigerator overnight. It needs at least 12 hours in the marinade but I’ve went as long as 24. The next day remove the pork butt from the marinade and discard the liquid. Use paper towel to blot the pork butt of excess moisture and place it on a platter or pan for seasoning. For the seasonings you need: Ground Cumin, Ground Chipotle Powder, Ancho Chili Powder, and Cinnamon. You can find these at most supermarkets but if you have a Pensy’s spice store nearby I suggest giving it a visit. The spice selection there is amazing. The first layer of seasoning is more of the All Purpose rub I mentioned earlier. This blend goes great on everything and it’s the foundation of basic tastes that everyone is familiar with. The other seasonings are used to create the Mexican flavor I want the pork to have, and I really don’t measure how much of each ingredient goes on the pork butt. Just eyeball each, one-by-one, and season all sides of the pork. Lastly, just for a little extra color, sprinkle on The BBQ Rub. It has enough cumin, chili powder, and paprika to go right with Mexican flavors. As soon as the grill hit 275 it’s time to start cooking. Center the Pork Butt on the cooking grate and close the lid. There’s no need for opening the cooker for at least 4 hours. I want the outside to develop a nice crust or bark. Keep a close eye on the temperature of the grill and adjust the fuel or air as needed. It’s also perfectly ok to cook this pork butt at lower temperatures; just remember it’s going to add time to the cooking process. 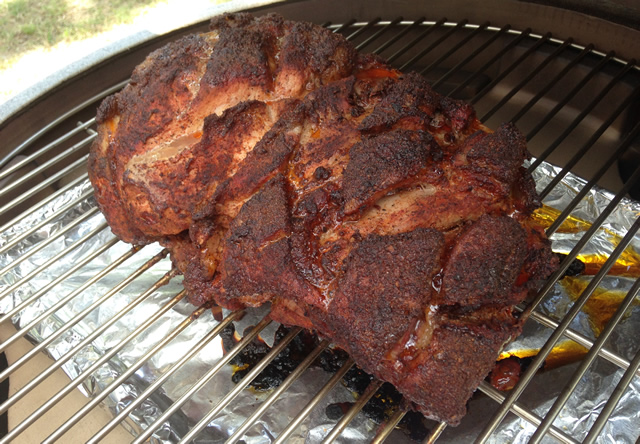 During the first four hours I’m not the least concerned with internal temperature of the pork butt. It’s all about the color of the bark. Open the lid at 4 hours and you’ll see that it’s starting to look a little crusty and maybe even turning a bit dark in places. This is perfect. Now it’s time to braise the pork and make it fall-apart, tender. Take the pork butt inside and place in a large aluminum pan. For the braising liquid you’ll need: – 32oz Tomato Juice – 16oz Orange Juice – 1 Onion quartered – 5-6 cloves of garlic smashed – 2-3 Bay Leaves – 2 Guajillo Peppers (dried) – 2 Limes quartered Pour the juices into the pan around the pork about 2 inches. Make sure you’re using a pan big enough to hold the liquid. You can reduce the amount of juice used if you use a smaller pan. Add the onions, garlic, bay leves, peppers, and limes. Cover the pan with aluminum foil and place back on the grill still running at 275 degrees. I also insert a meat probe at this point, so I can monitor the internal temperature without having to open the lid. This will help reduce the cook time because the grill doesn’t have to recover from heat fluctuations. Wired meat thermometers are fairly inexpensive and worth the money. I think I paid $39 for the Thermoworks DOT and it’s simple to use. You can check it out here >> It should take about 3-4 hours for the pork butt to fully cook from this point. The target finishing temperature is right at 200 degrees. I usually set the alarm for 198 and check the meat with a hand held thermometer to feel for tenderness. When the probe slides in with little or no resistance the pork butt is done. It also has a built in thermometer of sorts. When you can pull the blade bone out clean, I guarantee you the butt is ready. Bring the pan inside and let it rest for 10-15 minutes. Now that the pork has rested for a few minutes, remove it from the braising liquid and place on a platter. You can reserve the liquid for later use if you plan on reheating the pulled pork. Strain the liquid and let cool. Skim the fat off the top and refrigerate. Then just pull the pork. I like to leave it in larger chunks instead of chopping it. I makes for a better taco that way. The best part of the day is assembling the tacos because that means it’s time to eat! My favorite accompaniments are Fresh Cilantro, Thin Slice Radish, Sliced Avocado and Lime Wedges. Warm corn tortillas in a cast iron skillet for a few seconds on each side. It’s best to keep a warm towel over the tortillas as you warm each one to prevent drying out. For these tacos I suggest doubling up the corn tortilla to prevent everything from falling through. There’s nothing worse than picking up a taco and all the ingredients staying on the plate. Lay two tortillas on a plate, place a mound of pulled pork down the center. Garnish with a couple slices of avocado and radish. Next a little cilantro or in my case a lot! Then the best part: Chipotle Sour Cream Sauce – 8oz Sour Cream – 4oz Mayo – 4-5 chipotle peppers in adobo sauce (chopped) – ½ Fresh Lime (juice only) – ¼ teaspoon ground cumin – salt and black pepper to taste It’s best to mix this sauce up ahead of time and let it rest in the refrigerator for an hour. Last but not least squeeze a fresh lime wedge over the taco and a few shakes of your favorite Mexican hot sauce. Prepare to have your taste buds blown because this is one serious pulled pork taco!