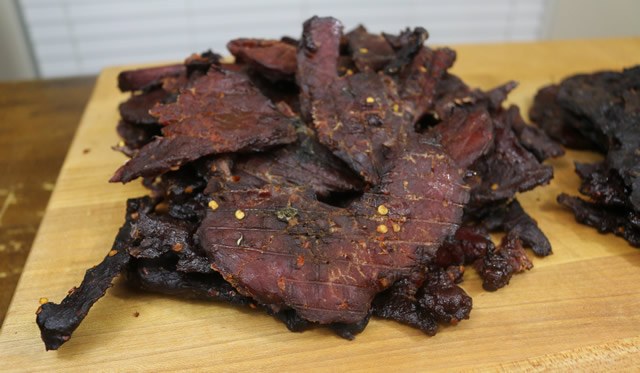 I’m sharing with you a few of my favorite recipes – Smoked Beef Jerky – for making jerky using both deer and beef. My Smoked Beef Jerky process starts with selecting the meat. For me that’s lean muscles from the deer or cuts of beef with little to no fat. For beef it’s roasts like London Broil, Eye of Round or Bottom Round work great and are often times less expensive at the supermarket. I’ll catch these on sale and store in the freezer until it’s time to make Smoked Beef Jerky.

I’m not a fan of ground and formed jerky, so everything I make is basically a thin strip. It helps to have the meat semi-froze when you’re cutting it so take it out of the freezer the day before and let it thaw in the refrigerator. Use a good knife and cut the roasts into 1/8” strips across the grain. Make sure you spray each rack with cooking spray so the meat doesn’t stick as bad and arrange the slices in one layer on the racks. You don ‘t want to crowd the racks so air can flow around the Smoked Beef Jerky. The process of turning the meat into jerky is all about removing moisture and using seasonings to preserve and flavor it. To remove the moisture from the jerky you have a few options. There are inexpensive dehydrators that work just fine, I’ve used the oven set to low temps, but my favorite way is out on the smoker. Smoke adds another depth of flavor to jerky that just makes it better. Today I’m using my Ole Hickory Smoker to dry out the Smoked Beef Jerky. I’m running very little coal, about 2 handfuls, and a couple chunks of seasoned hickory wood. Any smoker can be set up for jerky as long as you keep the temps low. 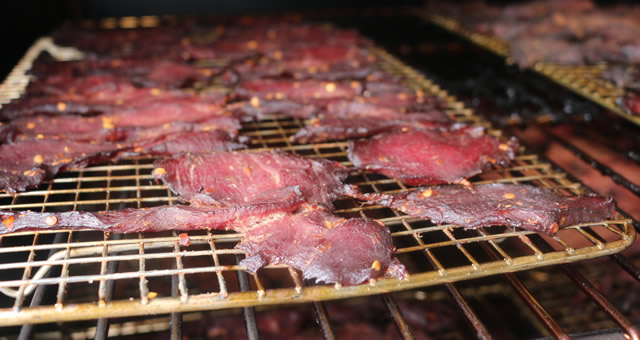 I want to see 140-160 degrees for the first part of the cook. It’s going to take somewhere between 6-8 hours for this load of Smoked Beef Jerky to dry and it’s not exact, so be patient and check on it along the way. You should see a thin smoke rolling through the smoker and as the wood and coals burn down, you’ll need to add a little more of each. In my smoker it last about 2 hours; then another handful goes in the firebox. Keep the lid closed as much as possible. After 4 hours take a look at the jerky and check for moisture. It should still be soft at this stage and it’s a good time to rotate the racks. As the meat dries some of it may need to come off. I like my jerky a little flexible instead of rock hard, so once most of the moisture is gone it doesn’t hurt to try a few bites and see where it is.

Some of my racks came off at the 6hour mark and the bigger slices took a couple more hours. There’s no right or wrong time here just make sure the moisture is gone and it has the feel you like. Let the racks of Smoked Beef Jerky sit out on the counter for a little while to cool. I’ve found that if you place the jerky in storage bags right away what little bit of heat present will create moisture in the bag. Once the Smoked Beef Jerky is completely room temps it’s time to bag it up. For Storage of the Smoked Beef Jerky: the Legg’s batch we made with pink salt is perfectly safe to keep out. It will last a long time and is great to take along on hunting trips. The other two batches need to be consumed within a week or so – you can also keep it in the refrigerator to prolong shelf life. It will last even longer if you vacuum seal it. The act of turning meat into jerky takes time but it’s not a difficult process. That’s a big part of why it cost so much in stores. Pound for pound it’s some of the most expensive meat you can buy, but if you don’t mind putting in a little work you can make your own jerky for a fraction of the cost. Give these recipes a try and let me know what you think. Malcom Reed Connect on Facebook Follow me on Twitter Subscribe to my YouTube Channel Find me on Google+ Follow me on Instagram Smoked beef jerky and smoked deer jerky