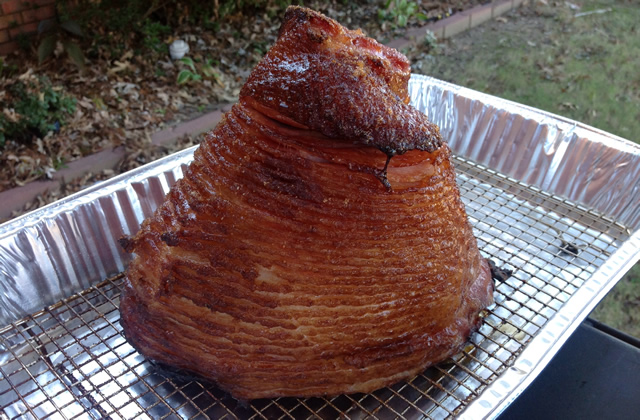 I love smoking holiday hams. Hams are one of the easiest things to smoke and incredibly delicious… when you do it the right way. When I was a kid growing up, we always had a baked ham or a ham bought from Honey Baked Hams… and I always thought those two hams were good. But they are nothing like a slow-smoked ham. I’ve been smoking hams for different holidays for years… Thanksgiving, Christmas and especially Easter. Now my family isn’t happy around the holidays unless I smoke a ham. So, over the years and I have gotten the recipe down. It just takes about 4 hours and you have the best tasting ham you will ever try. Its just something about the slow-smoking process that always produces a better-tasting meat. Now, if you have never smoked a Holiday Ham before, don’t worry. Just follow this Smoked Ham Recipe, stick to the steps and you will have perfectly smoked ham that your friends and family will be bragging about for a long time.

Step #1. First you’ll need to purchase your ham. When I refer to ham I’m not talking about a “green ham” (one that’s not cured). I’m actually referring to a sugar cured ham that you can find in most all grocery stores – especially around the holidays. If you smoked a “green ham” it will turn out more like BBQ or pulled pork… and that is not what you want for your Holiday Ham. The ham you will purchase will have already been smoked and cured somewhat. Traditionally, most people purchase these hams and then cook them in the oven slowly for several hours. This method of cooking a holiday ham in the oven with a sweet glaze is good… but once you’ve tried it on the smoker, you’ll never put one in the oven again. One brand that I like to cook is Mash’s brand sugar cured ham. I find them at grocery store in my hometown and they usually run around $15-20 bucks depending on the sale price. These hams will keep in the freezer, so if you catch them on sale you can go ahead and purchase it and throw it in the freezer until you are ready to smoke. I have personally had a holiday ham last for 9 months in the freezer… and once I thawed it and smoked it, it turned out just fine. Step #2. Other items you’ll need to smoke a ham include: Step #3. Bring Your Smoker Up To Temp Now that you have all of the necessary ingredients, set up the smoker for indirect cooking and bring the temp up to 225. While the smoker is climbing up to temperature, unwrap your thawed Ham and use paper towel to remove excess moisture. Step #4. Rub Your Ham Next you want to coat the outside of your ham with the Honey Dijon Mustard and then lightly dust your ham with Brown Sugar. (don’t go too heavy here, you will come back and add another, heavier coating of brown sugar later). This will create almost a “paste” on your ham. (you can also use a light dusting of Killer Hog’s The BBQ Rub to add to your brown sugar if you like) Step #5. Smoke Your Ham Once your smoker has reached 225 degrees, I always add a few chunks of wood to your smoker’s coals. All that’s left now is to put your ham on the smoker. After smoking the ham for two (2) hours at 225 degrees, take it off the smoker and wrap in aluminum foil. But before you close the aluminum foil completely, you want to baste the ham with your pineapple juice. I have found it is easiest to pour the juice into a spray bottle then just hit the ham with a few squirts. Once I have basted my ham with pineapple juice and wrapped it in aluminum foil, I place it back on the smoker and allow it to cook for 1 hour at 225 degrees. After 1 hour, check the internal temperature of your holiday ham. You are looking for an internal temp of 145 degrees, and at this point your ham should be close. When your ham reaches 140 degrees internal, it’s time to glaze. Unwrap the top of the ham, but keep it setting in the foil. I try and make a “boat” to keep the juices from spilling. Now that the ham is exposed, sprinkle brown sugar over the entire outside again. Once your ham is covered in brown sugar, spray it really well with pineapple juice. This will cause the brown sugar to dissolve and the heat from the smoker will create a beautiful, delicious glaze that goes perfectly with the taste of your smoked ham. Your holiday ham will stay on the smoker for 1 hour while you allow the sugar and juice to create your glaze. Step #7. Rest Your Ham At the 4 hour mark your ham is ready to come off the smoker. But you always want to check your internal temp just to be sure. Your ham should be at least 145 degrees internal. If it’s a little higher than that, don’t worry… as long as you haven’t kept it on the smoker for more than 4 hours it shouldn’t be overly done. Now you will remove your ham from the smoker and loosely tent it with the foil while you allow it to rest. I recommend letting it rest for around 20 – 30 minutes… then it’s ready to eat. When cutting your ham, I suggest a really good meat carving knife… but an electric filet knife works great too. I promise you that once your family and friends try this ham that you’ll never cook it any other way. Malcom Reed Connect on Facebook Follow me on Twitter Subscribe to my YouTube Channel Find me on Google+ Follow me on Instagram