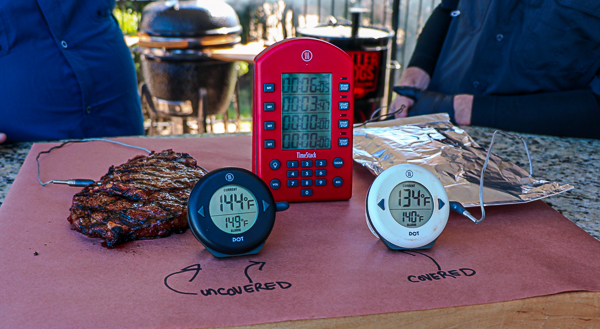 How Much Does Meat Carryover?

It’s a fact that all meat will carry over a few degrees once you take it off the grill. I wanted to run a little BBQ experiment and see just how far does meat carryover…  For these experiments we used our trusty Thermoworks DOTs. First I gotta thanks Mark Williams from Swine Life BBQ for coming over and helping with this BBQ experiment. You can connect with Mark here >> For this test I chose two different cuts of meat. The first is a typical ribeye steak cooked hot and fast and for a larger cut I went with a pork butt cooked low and slow. I knew from experience that no matter the technique both meats will continue to cook for a short time after they come off the grill.

The question is: How far will it climb if you rest them different ways?

For the ribeye test we seasoned the steaks the exact same and cooked them over lump coal with a grate temp of 600⁰ using GrillGrates for even heat distribution. The cooking process was standard, 2 minutes twist then 2 minutes flip. At this point we inserted a DOT meat probe into the center of each ribeye and monitored the internal. Once each steak hit 130⁰ we pulled them off the grill. One steak went into a foil pouch to trap in the heat. The other steak simply went on the cutting board completely exposed to outside conditions. Both probes were left in the steak and here were the results: The covered steak climbed about 5 degrees in 3 minutes and after 5 minutes it started dropping back down. Around 11 minutes after coming off the grill it was back at 130⁰. The uncovered steak climbed a total of 14 degrees in 3 minutes and also started to fall after 5 min. At the 11 minute mark it was also back at 130 degrees. The uncovered steak climbed way more than I expected even though we took them to the exact same temperature on the grill. It’s possible that the probe hit a pocket of fat or it ended up closer to the surface after transporting it to the cutting board but we did our best not to move it the entire cook. 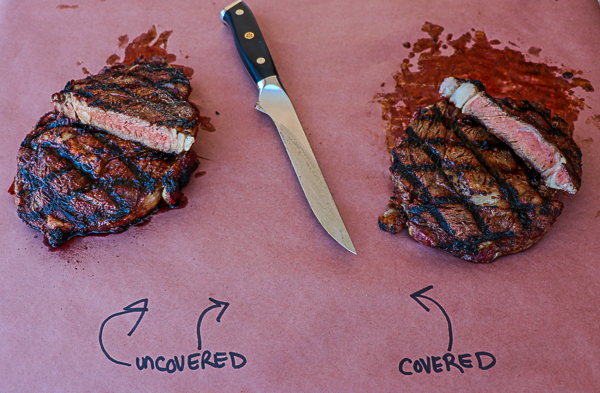 We cut both steaks across the loin where they were probed and both were at a medium doneness. The uncovered steak did have more grey at the bottom because it took it a few more minutes to hit 130⁰ on the grill but the covered steak had an even pink color from top to bottom. We definitely saw carryover on both steaks. As far as covered vs. uncovered goes it didn’t make much difference. Both steaks dropped back down to the target temp of 130⁰ at the same rate.

For the larger cut of meat…

I expected it to carry over more because of the high finishing temperature. I smoked them on my Gateway Drum running at 250⁰. After 5 hours each was wrapped in foil with a DOT meat probe inserted into the center. Once the butts hit 198 it was time to test the carryover. The first butt went into a dry cooler lined with a couple old towels. TheDOT meat probe was left in and the clock started. As soon as the second butt hit 198, we simply removed it from the grill and set it on the counter. It was about 15 minutes behind the covered pork butt. I expected the covered pork butt to continue to climb as far as 10 degrees, but that was not the case. It rose 3 degrees in about 7 minutes and stalled out for 26 minutes then it started going down. The uncovered pork butt rose 4 degrees to 202⁰ internal after 15 minutes then it stalled. After 22 minutes it also started going back down. There wasn’t a huge difference in the time or final temperature between resting on the counter or in the cooler as far as carryover goes. We pulled the uncovered butt once it started to fall (can’t do a BBQ experiment without sampling the product), but I was curious as to how long the cooler butt would hold temp above the safe zone. I took it inside and watched it for several hours. After 5 hours it finally hit 140⁰. (At this point you need to serve it or refrigerate). So the take away from these experiments is that both types of meat carryover after cooking. The amount of carryover isn’t as drastic as we assumed, and it really didn’t matter how you rest the meat once it’s done. We also proved if you need to hold a large cut of meat, like a pork butt, then a dry cooler is a good option and it will stay above the danger zone for several hours. It’s always a good idea to use a probe thermometer to keep an eye on internal temperature. Once the temperature falls below 140⁰ time is critical. It needs to be immediately served or refrigerated to prevent possible contamination. Food safety rules are something we all should follow. For more info on the Thermoworks DOT Probe Thermometer, You can check it out here>> Malcom Reed Connect on Facebook Follow me on Twitter Subscribe to my YouTube Channel Find me on Google+ Follow me on Instagram