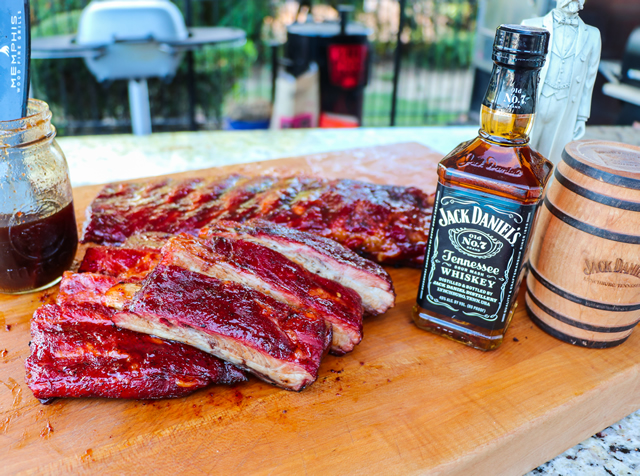 I don’t know if there is a better way to celebrate Labor Day than with some Jack Daniels Ribs! Jacks Daniels Whiskey really has a nice caramel, sweet, oaky flavor that works great in a BBQ Sauce – and when glazed on a couple slabs of ribs, you have some dynamite BBQ folks will rave about. To start with, I purchased 2 slabs of whole Spare Ribs and trimmed them into St. Louis Cut. For a video on how to trim down your own spare ribs click here >> 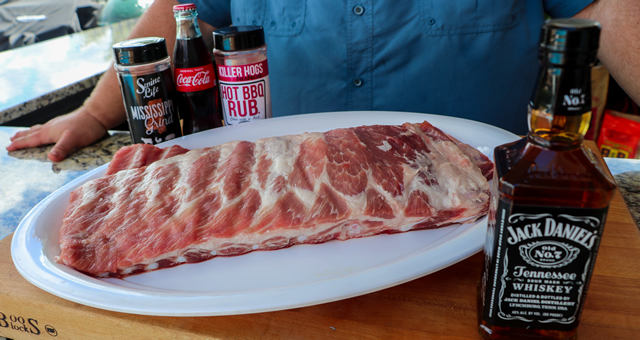 I let the seasonings work on the ribs while they came up to room temp. During that time I fired up my Memphis Wood Fire Pellet grill to 250 degrees with some hickory pellets. You can use any smoker or cooker for this recipe, you just need to hold the temps steady right around 250 for the entire cook. Once the pellet grill was up to temp, I placed the two slabs of ribs straight on the grate and let them cook. I just let them soak up the smoke for about 1.5 hours. Once they had started to form a good bark and started looking a little dry, it was time to baste. I wanted to keep the same flavors going, so I decided to baste them with a Jack & Coke. I just mixed up a drink, let it all come to room temp and poured it into my Big Orange Sprayer. I basted the ribs a couple times during the cook as they needed it. Jack and Coke Spritz Combine ingredients and allow mixture to come to room temperature before placing in spritz bottle. 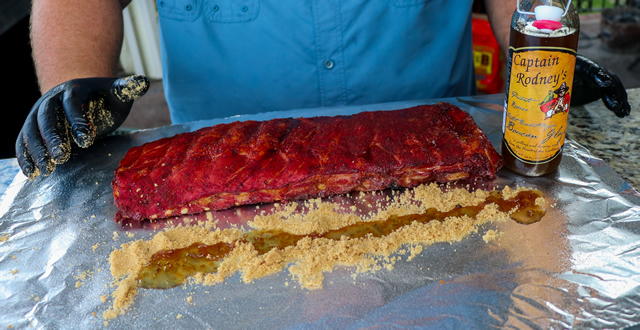 After the ribs had been on for about 2.5 hours they had a great bark developed and some good color, so it was time to wrap. I kept the wrap pretty simple – just another baste of Jack & Coke, a little brown sugar and a touch of Captain Rodney’s Boucan Pepper Glaze. I double wrapped the ribs in foil and place them back on the smoker to get tender. These Jack Daniels Ribs went about 1 hour and 15 minutes in the wrap. But every rack and every cook is different – so always check your ribs for tenderness before you take them out of the wrap and glaze. To glaze these Jack Daniels Ribs, I created my own sauce using Jack Daniels Whiskey and liberally brushed it on both sides of the ribs. Then I placed them back on the smoker for another 15-20 minutes to allow the Jack Daniels BBQ Sauce to caramelize and bake on. Jack Daniels BBQ Glaze Combine ingredients in a sauce pan over medium heat until brown sugar dissolves. Continue to heat until mixture reaches a slight boil and reduce heat to simmer. Cook for 5 min and allow to cool before glazing ribs. Once the glaze set, it was time to dig in! I sliced these ribs in single bone portions – and you can always serve some of the extra Jack Daniels BBQ Sauce on the side for dipping. These Jack Daniels Ribs were juicy, tender and really delicious. I love the flavor you get from the whiskey – and even though all the alcohol has cooked off you still get a depth of flavor you wouldn’t normally get. It takes these spares to a whole, new level of deliciousness! Print
Print Recipe
Pin Recipe