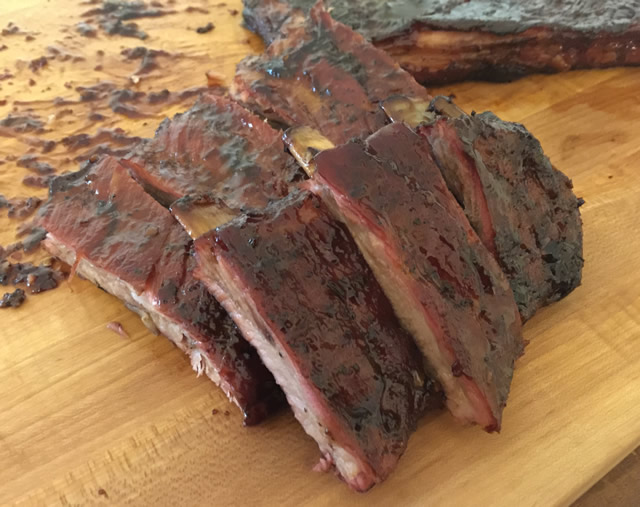 This week I have a rib recipe that you absolutely must try. It’s my take on Korean BBQ Spare Ribs and it’s all about Flavor! These ribs are way different than your traditional BBQ ribs. In place of a dry rub I use a marinade to season the meat, and at the very end I hit them with a Spicy-Sweet Korean BBQ glaze. In Korean Style bbq cuts of meat are marinated in Sugar and Soy Sauce with fresh Ginger, Garlic, Chilies, and Sesame Oil. Then its cooked over a grill often times right at the table. For this recipe I start with a couple slabs of St. Louis cut Spare Ribs. (Always remove the membrane on the ribs so your seasonings can flavor the meat on the bone side) It doesn’t hurt to let the ribs go as long as 8 hours in the marinade. Remove the ribs from the bag and place on a sheet pan while you fire up the smoker. For this cook I use my Big Green Egg with chunks of hickory scattered over the lump coal. The smoker temperature needs to be 250-275 degrees for this cook. Once up to temperature place the ribs meat-side up on the cooking grate and close the lid. Start the ribs out in the smoke for 3 hours. 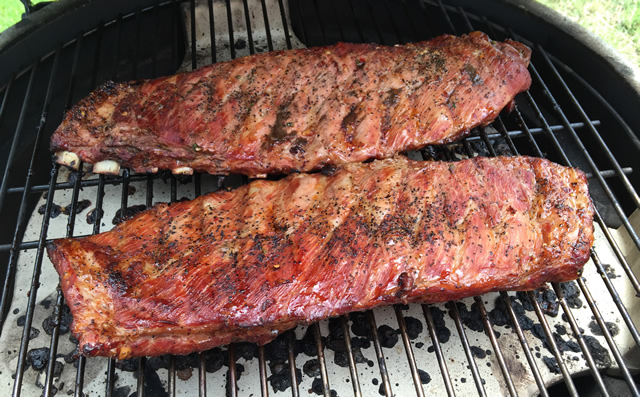 After 3 hours, wrap each slab in aluminum foil to render the remaining fat. (Render to get Tender!) Nothing is added to the foil at this stage but place the ribs meat side down when placing them back on the smoker. Typically spare ribs can take up to 2 hours in the wrap to get to perfect tender stage, but you want to check them after 1 hour to avoid overcooking. As soon as I see the bones showing through on the end and the meat drawing back about an inch they’re ready to come out of the foil. These two slabs were done at about the 1 ½ hour wrap mark. If you’re checking internal temperature with a thermometer it should be around 200 degrees and the meat should have little to no resistance. While the ribs are tenderizing in the foil it’s time to make the Korean BBQ Sauce for the final glaze. Korean BBQ Sauce In a sauce pan melt butter over medium high heat. Add onion and garlic and cook for 1-2 minutes until the onion are soft. Add soy sauce, water, vinegar, sesame oil, chili paste, and brown sugar. Stir to combine then add the ginger, black pepper, and red pepper flakes. Mix the corn starch and cold water in a separate small bowl and add to the sauce pan when the sauce strikes a boil. Stir until the sauce thickens and remove from heat. As soon as the ribs are tender, carefully remove them from the smoker. Unwrap the ribs and drain off any liquid that has rendered out. You can place the ribs directly back on the grill grate but I find it easier to fold the foil into a “boat” and use it to transfer the ribs back to the cooker. Brush each side of the ribs with the sauce and place the ribs on the smoker meat-side up. The ribs need an additional 20-30 minutes for the glaze to set. You want to keep an eye on it because the sugar can burn fairly quick, so don’t walk away too far. Once the sauce looks “tacky” the ribs are ready. Cut the ribs into 1-2 bone pieces and get ready to enjoy the hard work. These ribs have a rich, spicy-sweet flavor but the earthiness of the soy and sesame really comes through. 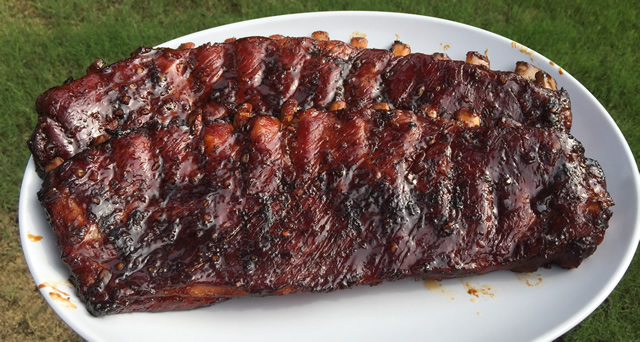