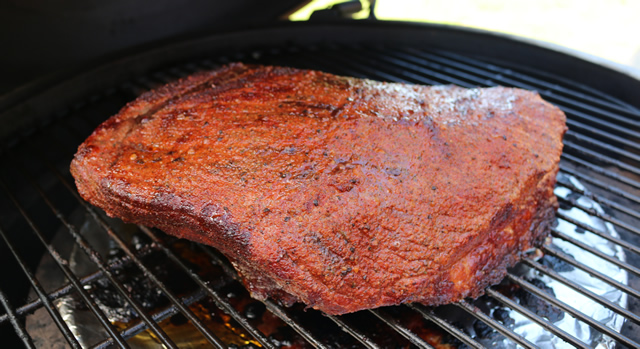 It is hard to beat a perfectly smoked slice of good brisket, and today I want to share with you how to achieve just that with a Smoked Brisket Flat. Beef Brisket is made up of two sections….the leaner, “flat” portion which is what most people think of when you say sliced brisket; and the fattier, pointy end or “Point” section which is where most of the brisket marbling lies. Brisket is sold either as a “whole brisket” (flat & point still connected) or just the flat alone. I’ve never seen just the point section available in my area but it may be in some places. Smoked Brisket Flat by itself can be a bit of a challenge to cook. The flat is lean which makes it is easy to dry out; it’s a hard working muscle which makes it naturally tough; and then after you cook it just right you still have to know how to slice it or you’ll be chewing for hours! But don’t let any of that worry you because I’m going to show you how to cook a perfectly tender piece of brisket flat that will blow your family and friends away. Smoked Brisket Flats in my area normally range from 6-10lbs. I’ve found that Costco and Sam’s typically have them in stock all year long even when whole brisket is hard to find. Look for flats that have a uniform thickness and a good layer of fat on the bottom side.

Remove the flat from the packaging and rinse under cool water. Drain any excess water and pat dry with a paper towel. Remove any excess fat from the meat (top) side and any aging from the outer edges. I don’t trim any of the fat from the bottom because it acts as a natural insulator keeping the flat moist. Now it’s ready for a good dose of seasoning on this Smoked Brisket Flat. For brisket I use a 3 step seasoning method. First it gets a good dose of my AP rub on all sides. I keep a batch of this on hand in my kitchen because it’s great on everything. Here’s a quick recipe for making AP. Next the Smoked Brisket Flat gets a layer of Killer Hog’s The BBQ Rub. Be sure to get the sides as well as the bottom with both the AP & BBQ Rub. Flip the brisket fat side down and pat the seasonings into the meat. For the last layer of flavor I use a coarse ground Montreal Steak Seasoning to give the bark more texture and a little flavor pop. The Montreal only goes on the meat side of the flat. At this point you could inject the brisket if you want too, but I prefer a more natural beef taste when cooking brisket at home. Just let the seasoned flat hang out for a few minutes while you fire up the smoker. 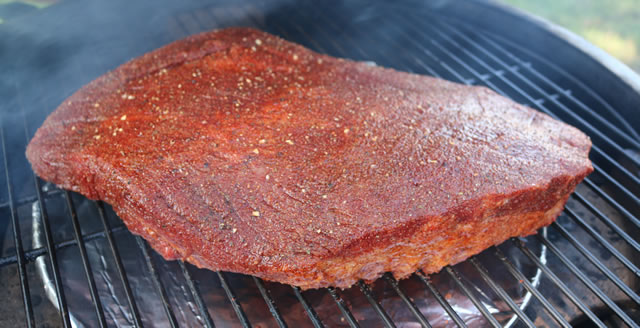 For this cook we’re shooting for a low and slow cook, so I have my Big Green Egg running at 250 degrees with a couple of chunks of pecan and hickory for smoke. Once the smoker has stabilized, place the Smoked Brisket Flat fat side down on the rack and kick back. The goal here is to keep the lid closed and hold the temperature steady at 250.

For the first part of the smoking process we’re looking to get some color on the outside and raise the internal temperature slowly to 165 degrees. It should take about 4 hours on an 8lb Smoked Brisket Flat like this one. Keep an eye on the color it’s the best indicator at this point. When you see it getting dark, it’s time to wrap. I use a crisscrossed layer of aluminum foil for this. Center the Smoked Brisket Flat on the foil and bring the edges up and around. Before closing the foil, pour in 1 cup of beef broth for additional moisture. Seal the foil tight and place it back on the smoker. At this point time is out the window. You want to monitor the internal temperature because this is where you can ruin a flat. Smoked Brisket Flat is done when it hits right at 200 degrees and if you over shoot it there’s no coming back. I highly suggest investing in a good probe thermometer like the thermoworks DOT or Chef Alarm. At first the temperature will move a little slow but when the flat hits 185 it’s going to gain temperature fast and you need to be there to get it off the pit. It’s also a good idea to test the doneness with a separate thermometer. Not only are you verifying internal temp but you can feel how the probe goes into the meat. It should have little resistance at this point which is a good indicator that it’s done. This last piece of advice will step your brisket game up big time and that to let the Smoked Brisket Flat rest for several hours. It’s as simple as wrapping the flat in an old towel and placing in a dry cooler with the lid closed. Leave it in the dry cooler for a minimum of 2 hours but I’ve went as long as 6 and the brisket it still hot enough to require gloves to slice it. The resting period allows the brisket to calm down and recover some of the moisture lost during cooking. After a good rest the Smoked Brisket Flat is ready to slice. Unwrap the foil and place the flat on a cutting board. 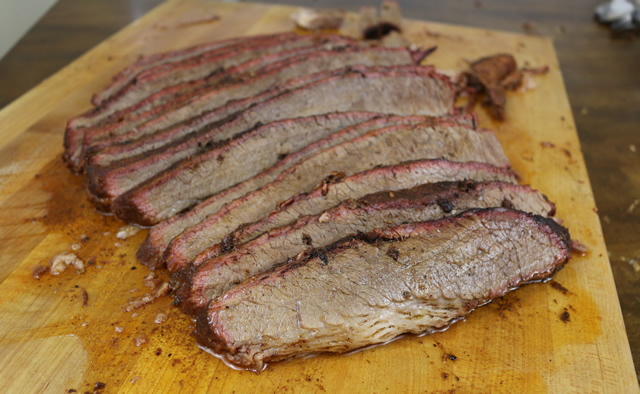 Don’t just toss the foil out though, all that juice that cooked out can be used for Au Jus after separating the fat off the top. Before you slice the Smoked Brisket Flat locate the direction of the grain. Move out to the edge, and make your first slice Across the Grain. This is crucial, all of your effort will be for nothing if it’s not sliced properly Trust me on this! Don’t be scared to pick up that first slice and inspect it. Make sure you’re hitting it across the grain. After that the rest is easy; just make repeated slices about ¼” wide down the rest of the Smoked Brisket Flat. If there’s any excess fat on the bottom of the slices you can remove it, but I usually leave it attached because it’s good eating! Brisket, especially the flat, can be tricky to perfect but if you season it well, get some smoke on it for a couple hours, wrap and closely monitor the internal temperature, and last but most important rest for a couple hours… you will be well on your way to brisket nirvana. Malcom Reed Connect on Facebook Follow me on Twitter Subscribe to my YouTube Channel Find me on Google+ Follow me on Instagram Smoked Brisket Flat