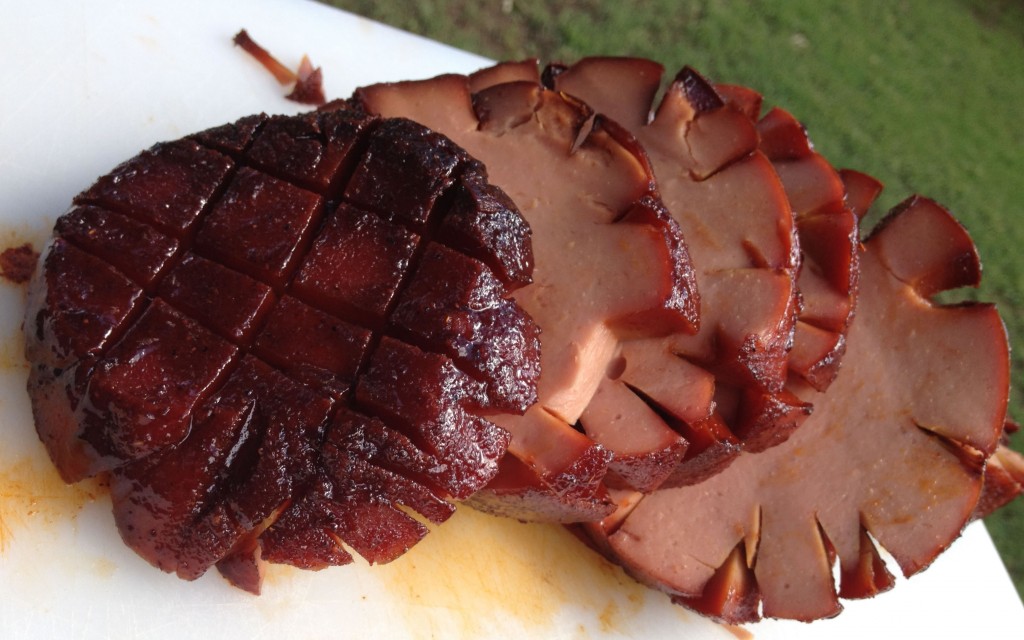 One of the finest bbq memories I have growing up around a smoker, is the taste of BBQ Bologna. Don’t turn your nose up at the thought; I promise it’s mighty fine eatin’. If you find yourself at one of my shin-digs chances are you’re gonna get to sample some of the finest bbq bologna you’ve ever tried. I’ve been cooking it this way for as long as I can remember, and it’s one of the easiest things to smoke that I know of.

Of course you’ll need a smoker and some wood/charcoal for heat, but here’s a few other things you’ll need as well.

It doesn’t get much easier than this….

Fire up the smoker and bring it to 225 with a thin smoke rolling out. Place the Stick of Bologna on a cutting board and remove the “red skin” wrapper. Using a chef’s knife, bologna in half. Now take your BBQ dry rub and sprinkle a good coating on all sides and it’s ready for the smoker. Place it on the rack and close the door. You’re done for 3 hours just be sure to keep the fire going and the temperature at 225.

After 3 hours of cook time and a few cold beers, it’s time to glaze. By now I’ve usually have a crowd of folks hanging around the smoker looking like starved vultures.

All you need is a bun, yellow mustard, and a little coleslaw and you have one fine eatin’ sandwich. For those folks that like a crispy bbq bologna sandwich, have a hot grill going when it comes off the smoker. Throw a few slices on the hot grill and let each side sear for just a couple minutes on each side.

Another way of serving BBQ Bologna is to quarter up Red & Green Peppers and Sweet Vidalia Onions. Start them in the bbq sauce bath alongside the bologna at the beginning. After the Bologna has smoked for 3 hours, slice it and throw the pieces into the bbq sauce bath. Cover with Aluminum foil and let it all cook for another 30 – 45 minutes. Set the entire pan in a wire chaffing rack and jump back cause people are going to flock to it!