This past weekend I had the opportunity to be a judge for a new television show on Destination America. Of course I wasn’t told when it will air but I expect it to be sometime early summer. I’ve been judging BBQ for years but this was my first judging experience on camera. The format for this show was based on late night food in cities across America and they wanted to capture the feel of a late night crowd. I was a little shocked when they asked me to be there at 10:30pm… but hey, I’m easy going so I just rolled with it. My part of the show was filmed outside entirely, so you can imagine being February 2nd it was extremely cold. That was the only negative part of the whole experience. As far as the judging went, it was the host Adam Gertler, Melissa Cookston, 3 time Memphis in May Grand Champ and owner of Memphis BBQ Company, and myself. 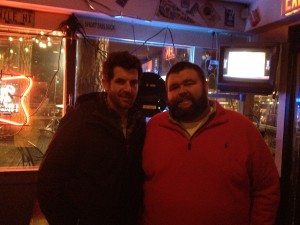 I can’t disclose too much information on the actual contest, but we sampled some really good entries prepared from chefs local to Memphis. The filming took place at Patrick’s in Memphis . It’s been in business for over 18 years and is known for its’ made-from-scratch cooking and eclectic atmosphere. The crowd that showed filled the restaurant completely and they hung in to the end. Filming wrapped at 4:15 in the morning and I’m sure everyone there needed some “late night” food to soak up all of the beverages consumed. I had a great experience working with crew from Destination America and I really appreciate the opportunity. Malcom Reed Connect on Facebook Follow me on Twitter Subscribe to my YouTube Channel Find me on Google+ Follow me on Instagram