Recently I’ve had several questions about cooking a Sliced Pork Butt Sandwich. Now Typically all of the butts I cook are pulled. I prefer juicy, tender pulled pork with bits of crunchy bark mixed in. And you don’t see Sliced Pork Butt Sandwich in Memphis, but in some parts of the country, that’s how it’s served. One of the best restaurants that I can think of for sliced pork is the famous Arthur Bryant’s in Kansas City. They serve piles of thin sliced smoked pork on Texas Toast. It’s a simple sandwich, but it’s loaded with smoky pork goodness. This week I’m cooking sliced pork… Arthur Bryant style. The first thing I do is debone an 8lb Boston Butt. Normally the bone is left in the roast (meat cooked on the bone just has a better flavor), but because I want to slice the finished product on a meat slicer, I need the bone removed. To debone the roast, use a boning knife and insert it next to the blade bone. The bone will show you were to cut just follow it. Work around the entire bone and it will come out easy. Once the bone is removed, use butcher twine to hold it together. If you don’t tie it, the butt tends to flatten out and lose its’ shape. Tie 4 to 5 strands across the butt spaced 1” apart; then run two strands lengthwise. It will have a nice round roast shape when tied properly.
It gets seasoned next with a light coat of mustard and a good dusting of Killer Hogs The BBQ Rub. I kept the injection simple just:
I fired up my Ugly Drum Smoker (UDS) and added a few cubes of cherry wood for smoke. The butt went on as soon as it was up to temp. (I was cooking about 250 degrees, 2 vents open) After 2 hours it was time for a quick baste and more rub. This is what builds a beautiful bark on the exterior. Normally a butt gets wrapped at 165 internal, but because I wanted to slice it, there was no need for wrapping. My target finishing temp was 165-170. And as always, you gotta have a good instant read thermometer for checking the internals. I like to use my Thermoworks MK4 – and you can check it out here >>
After 4 hours of cook time I checked the internal temp and it was at 154 degrees. I hit it with a little more baste and rub and let it roll for 1 more hour. It was sitting at 172 at this point, so I took it off the smoker. If you try to slice it when it comes off, it will lose moisture and can fall apart, so I wrapped it in aluminum foil and allowed it to cool. To speed the process up I placed it in the refrigerator after resting on the counter for 20 minutes. 4 hours later I couldn’t resist the urge to run it through the meat slicer. I don’t have a fancy commercial unit. Mine is an inexpensive Deni Electric Food Slicer – and It works just fine for cooked meat like butts or brisket. I dialed in the size slice I wanted – about 1/16” – and sliced the entire butt. It yielded about 4lbs of sliced pork for this Sliced Pork Butt Sandwich.
it’s ready to eat at this point but I prefer mine warm, so I mixed the juices from the foil with a ¼ cup of chicken stock. Place the slices in a sauté pan, add a little of the liquid, and cover it. It only takes a few minutes to create steam, and you’re ready to eat. Traditional Arthur Bryant style pork is served on plain Texas Toast with sauce drizzled over the top, so that’s exactly what I did. I piled up 1/2lb of meat on the bread, drizzled it with The BBQ Sauce and dove in. This Sliced Pork Butt Sandwich was absolutely delicious. 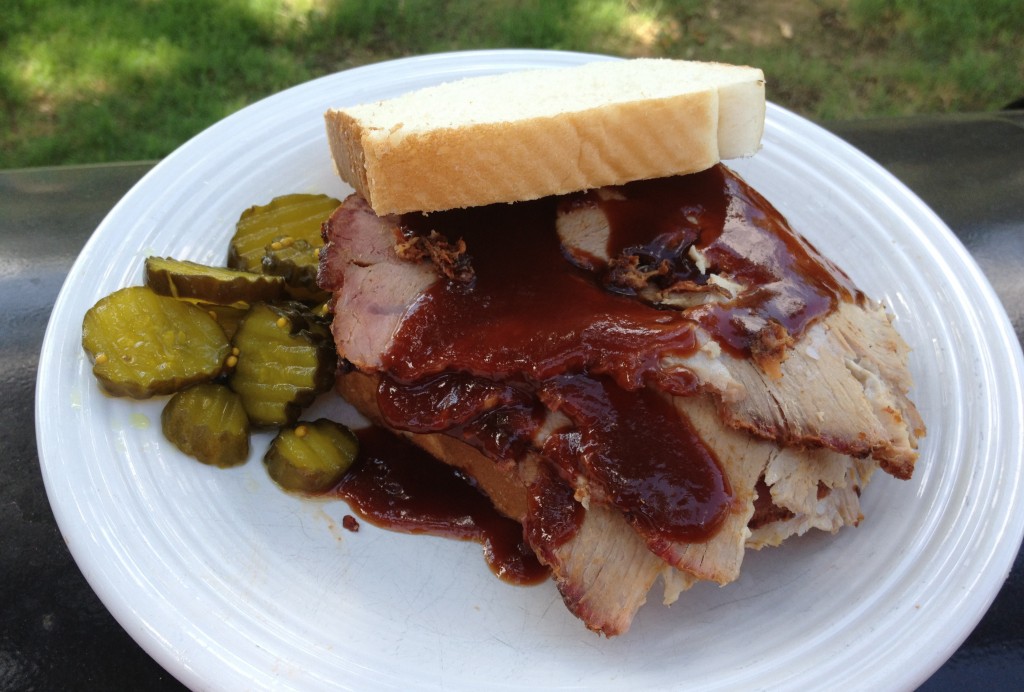