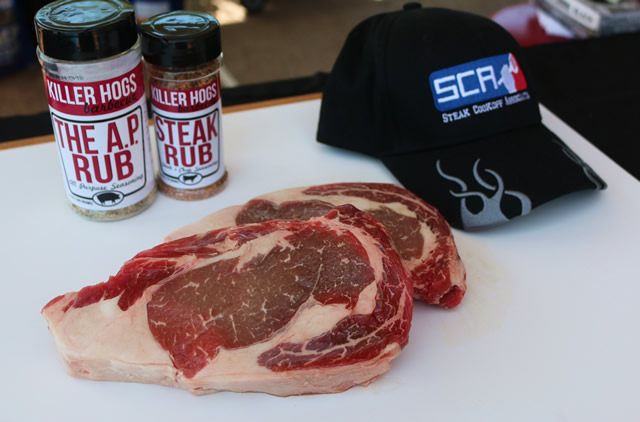 Steak Cookoffs are quickly becoming the fastest growing segment of the BBQ world and the SCA is the sanctioning body behind cooking these SCA Ribeye Steaks. At an SCA event the rules are simple; contestants draw a number at the cooks meeting, line up in order, and have 30 seconds to select a ribeye steak. Once everyone goes through the line, the numbers are reversed and you pick one more steak. Typically turn-in time is about 4 hours later and any fire or heat source can be used to cook the steaks. One SCA Ribeye Steaks is turned in for blind judging. It goes in a take-out style container sitting on a foil disc provided by the organizers. There’s no garnish allowed so it’s all about the steak. The entries are judged for: Appearance (does it look appetizing?), Doneness (medium – warm pink center), Texture (is it tender?) Taste (do you enjoy the flavor), and Over All impression. The SCA has a double blind system in place for this process; judges have no way of knowing whose steak is in the box. Every contestant is given a ticket at the turn-in table and it must be signed. When it’s all over, the winning numbers are announced, and that’s when you find out who holds the winning ticket.

I was hooked 2 years ago when I cook my first SCA contest and here’s how I cook the winning SCA Ribeye:

First off we need to talk about selecting the perfect ribeye. I’m looking for a steak that has plenty of marbling because that’s where the flavor is. Also I look for the spinalis or “cap” which is where the most tender meat is located. The perfect ribeye should have a large eye and plenty of cap meat for the judges to sample. When it comes to trimming a ribeye, remove any silver skin or large fat deposits from the edges. Some steaks will have a lip attached on the end opposite the spinalis/cap. I remove this prior to cooking because it’s primarily fat and the appearance looks better (more uniform). For seasoning I use 3 different rubs. The first is a generous layer of Killer Hogs AP Rub (salt, pepper, garlic). The AP needs to work on the steaks for 30 minutes prior to cooking. Place them in a pan and refrigerate or store in a cooler. Just before grilling, hit each steak with a layer of coarse ground Steak Rub followed by just a touch of my Hot Rub. This one has a little extra pepper which brings some heat and gives the steak color. In SCA contest I cook on a classic PK Grill. – you can check out PK Grills here >> It’s the perfect grill for cooking steaks and when you add a set ofGrillGrates (check these GrillGates out here >>)., you can’t beat the appearance. Start a chimney of charcoal 1 hour before the steaks go on grill. As soon as the coals ash over (about 30 minutes), add them to the PK Grill and let the temp skyrocket to above 500⁰ at grate level. I like to give it another 30 minutes before I start to cook. The turn in window last for 30 minutes in an SCA contest, so you have plenty of time to cook 2 ribeyes. Place each steak on the GrillGrate and cook for 2 minutes, give the steak a 90⁰ turn and continue to cook for another 2 minutes. This technique creates a perfect diamond pattern on the surface. 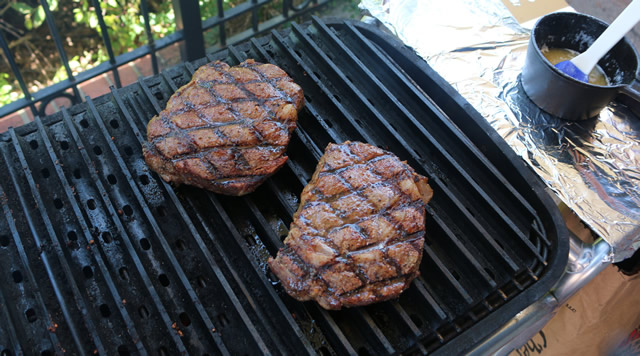 The judges aren’t supposed to judge the grill marks, but I firmly believe that this step helps the appearance scores. After a total of 4 minutes, flip the ribeyes over and set timer for 1 min 45 sec. Before closing the lid baste each one with melted butter seasoned with a touch of The AP Rub (I keep this warm in a small pot on top the grill). At this point internal temperature is crucial because the steaks have to be cooked to a medium doneness (warm pink center). Use a Thermapen and take them to 128-130⁰. When they hit this temp range remove each steak from the heat, brush on a little more melted butter, and let them rest for 5-7 minutes before placing in the turn-in box. Now all that’s left is turning in the entry and don’t forget to sign your ticket. It’s important to not lose it either because that’s your only claim to the winning steak. Oh and the extra steak… that’s for you to enjoy! I hope to see everyone at SCA event down the road. Print
Print Recipe
Pin Recipe