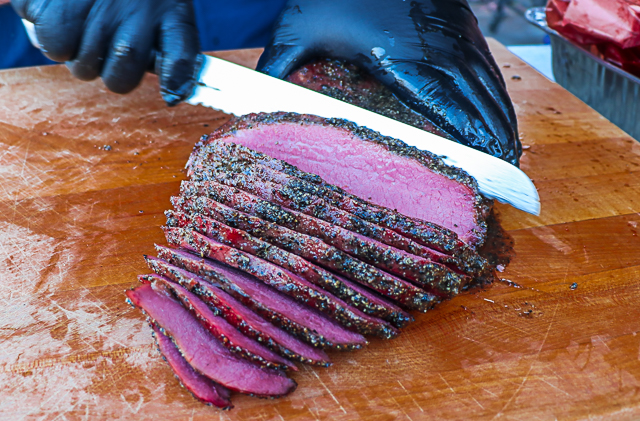 Pastrami was first made as a way to preserve meat. A brine is used to first cure the brisket; then it’s smoked, and typically steamed until tender. In the past, I’ve used a short cut to create pastrami by starting with store bought, corned beef brisket; but I wanted to see if I could brine my own and turn it into mouth-watering Pastrami.

The first step for my Smoked Brisket Pastrami recipe was to come up with a Brine. The basics of a pastrami brine include salt, sugar, and spices; but the most important part is the pink curing salt. It needs to be used in an exact ratio to achieve the desired result. 1 tsp per 5lbs of raw meat is required along with 1 gallon of water. The seasonings in the pickling spice and garlic can be adjusted. I used a store bought pickling spice but you could easily come up with your own version. For the brisket, I trimmed most of the fat and sinew off to expose the meat. This allows the brine to penetrate and cure it from top to bottom. It weighed 10lbs after trimming (so I needed 2 teaspoons of pink salt).

To make the brine get a large stock pot going over medium heat. Add 1/2 gallon of water to the pot along with the salt, sugar, and pink salt. Bring it to a simmer to dissolve everything and add the pickling spices and crushed garlic. Allow it to simmer for a few minutes just to make sure everything is dissolved and then remove it from the heat. Add the remaining water and allow it to cool.

Place the brisket in a container large enough to hold it and the brine. I used a XL Ziplock bag. Pour the brine over the brisket and get as much air out of the bag as possible to ensure the brisket stays submerged. Fasten the top of the bag with a zip tie and weight it down if necessary. Set the whole container in the refrigerator for 5 nights checking on it every day to make sure it’s covered in the brine. 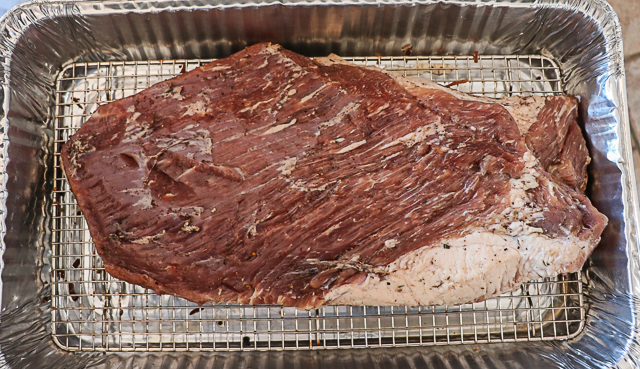 On the 6th day remove the brisket from the brine solution and pat any excess seasoning off the surface. Place the brisket on a cooling rack inside a full size pan to dry. Let it hang out in the refrigerator overnight. The next morning take the brisket out of the refrigerator and let it come to room temp. Season the outside with a good dose of Pastrami Seasoning (recipe below). 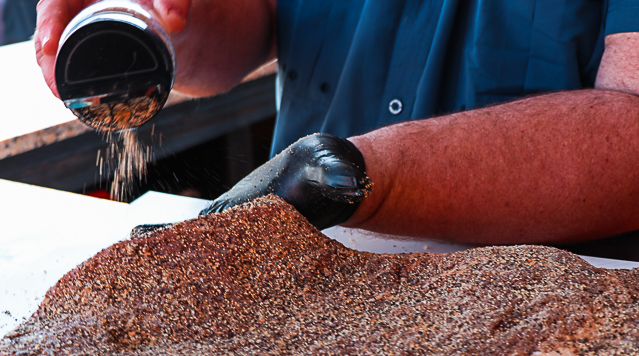 Fire up your smoker and bring the temp to 275 degrees. Place the brisket on the pit and add pecan wood to the fire for smoke (use your favorite wood if you prefer). Smoke the brisket for 4-5 hours or until the internal temperature reaches 160-165 degrees. At this point traditional Pastrami is steamed until it’s tender (that’s deli style Pastrami); I’m going for more BBQ style Pastrami. Wrap it in Pink Butcher Paper and place back on the pit. 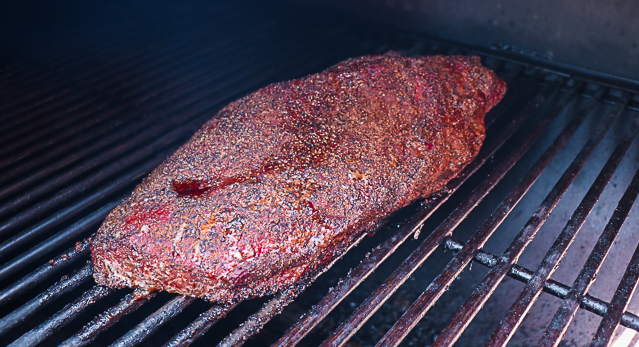 Insert a meat probe into the thickest part of the flat and continue to cook until the internal temperature reaches 204 degrees. For a meat probe, we are using a Thermoworks DOT (check them out here>>) At this point it needs a couple hours to rest and you’re ready to eat.

Homemade Smoked Brisket Pastrami is absolutely fantastic. It’s tender, juicy, and has all the flavors of the spices used in the brine and seasoning. It’s great on its’ own or stacked high on a sandwich. However you eat it, you have to give this recipe a try!