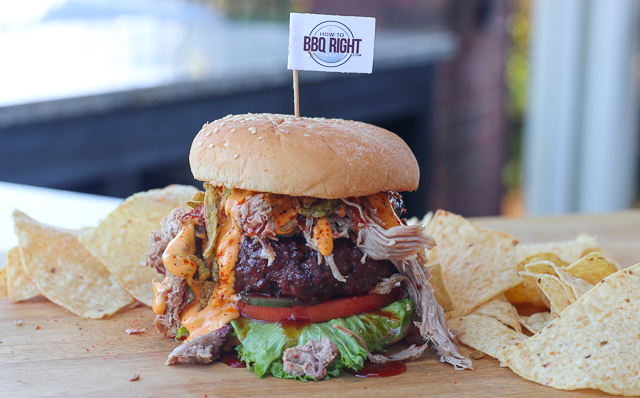 I had to do something Super for the Big Game this weekend so I decided to combine two of my favorite football foods. Bbq Nachos and a Smoked Burger!

BBQ Nachos were invented in Memphis TN where some of the best bbq in world is created. Tender smoked pork is layered over tortilla chips along with copious amounts of melted nacho cheese. Of course you have to layer on some bbq sauce and a little dry rub or it wouldn’t be Memphis BBQ. I took the BBQ Nacho a step further with this recipe forgoing the bed of tortilla chips and layering it on top a 1/2lb smoked hamburger. This is one seriously Super Burger. Two of my favorite foods for game day (aside from wings) is BBQ Nachos and a Smoked Barbecue Hamburger. In this recipe, I combine them together for my BBQ Nacho Burger.