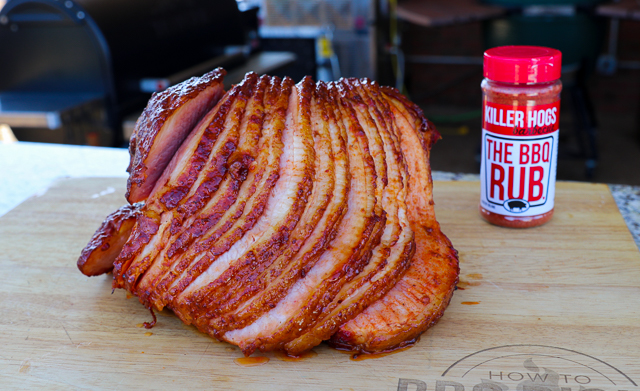 Hams are not just for the holidays! This is recipe is one of my favorite ways to “double smoke” a spiral ham. Most people only think of a serving a ham for the holidays but let me tell you this ham recipe can be served year round and folks will be asking you for more.

Hams are not just for the holidays!  This is recipe is one of my favorite ways to “double smoke” a spiral ham. I like the spiral ham because it’s already portioned for you.  The slices take on the seasoning and glaze and each piece taste delicious.

I start with a fully cooked spiral ham but you can use any smoked “city” ham: shank, butt, or whole hams will work.I like the spiral ham because it’s already portioned for you. The slices take on the seasoning and glaze and each piece taste delicious. 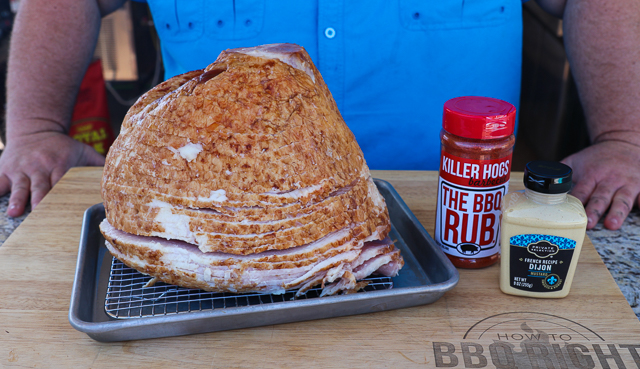 Since this ham is fully cooked you’re really just warming it up on the smoker and adding a glaze at the end. These hams are perfectly ok to eat out of the package or warmed in the oven but they are at their very best on the smoker. 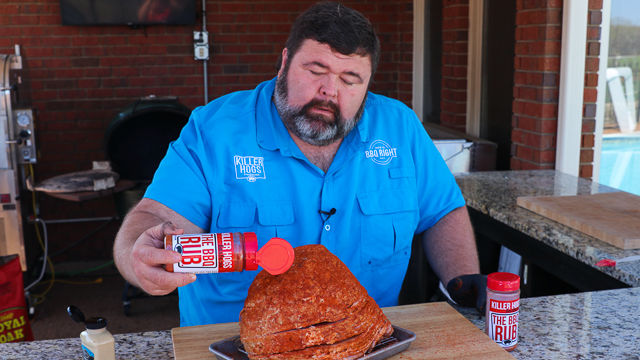 I start by applying a light coat of Dijon mustard on the outside. This acts as a glue for the seasoning. For that I use my The BBQ Rub but not too heavy. I want a hint of bbq flavor without being overly seasoned. The spiral ham goes on the pit for about 2.5 hours; I like to add a few chunks of cherry wood for smoke flavor this is where the “double smoke” comes into play. Then it gets the glaze. I mix brown sugar, honey, and my vinegar bbq sauce and baste it over the top letting it drizzle down into all the nooks and cranny’s! This glaze is sweet but also has a nice acidic balance that goes great on ham. The glaze needs to cook on for about 30 minutes and you’re all done – It’s that easy. Since the ham is spiral slice cutting it up is a breeze, just use a knife to free it from the bone and arrange the slices on a serving platter. I’ll be the first to tell you it makes some “Killer” BBQ ham sandwiches!