This past weekend we cooked in Ashland, Ms at their Southaven Sprinfest KCBS contest. And we scored another Grand Champion Win! And it feels good… real good… makes me want to do a little hollerin’ We got off to a bit of a rocky start. Had some problems with our truck, showed-up late and got a spot full of fire ants, struggled with the power breakers getting thrown on all the teams… but hey, sometimes that’s just the way it goes. 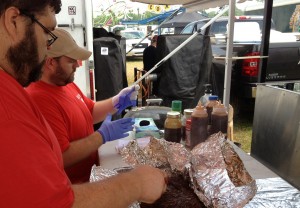 I have to say, the worst part was that there wasn’t a hotel within 30 minutes of this contest. Usually Waylon and I take shifts at night so we both can grab about 2 – 3 hours of sleep and take a shower. But this contest there was no shower – and there was no sleep. This video was shot after I’d been up for 27 – 28 hours… There were a total of 38 teams cooking in Ashland – and some pretty strong competition. River City Rub was there and took 3rd place. Kinney’s Kountry Kookers took reserve. Heavenly Manna BBQ, DoRag Q, Bar-B-Q 101, Fire Dancer BBQ were just a few of the other strong teams out there. But I gotta give a big Congrats to the Sultan’s of Smoke. This was their very first BBQ contest and they took 5th place in chicken (and won em’ some hardware). I have a feeling those boys might be cooking another contest sometime soon. 🙂 Malcom Reed Connect on Facebook Follow me on Twitter Subscribe to my YouTube Channel Find me on Google+ Follow me on Instagram