This week I thought I’d kick 2015 off with a great recipe for backstrap… my favorite cut of whitetail deer. The backstrap is cut from the top of the deer located on each side of the spine. It’s equivalent to the loin section off a cow or pig. I’m not sure where the name back strap originated, but I’ve always heard it referred to as backstrap (so that’s what we call it). As far as deer meat goes, it doesn’t get better than fresh backstrap. You can cut it into steaks just like beef filet, slice it thin for pan frying, or (my personal favorite) leave it whole and smoke or grill. I start with 2 whole venison backstraps. With any kind of deer meat you want to make sure that it’s properly trimmed, and by that I mean that all silver skin and sinew is removed from the meat. This is where the “gamey” taste comes from that some folks associate with wild meat. If it’s been properly trimmed and packed deer should never have a “wild taste”. Backstrap is naturally tender, so you really don’t have to marinate or brine it. It’s ok to give it a soak if you want to add some extra flavor, but it’s delicious on its own as long as it’s cooked right. For this recipe I’m skipping the marinade and using my All Purpose blend of Salt, Garlic, and Black Pepper on the outside. (The ratio is: 2 parts salt, 1 part Granulated Garlic, and ¼ part ground black pepper) Give the backstrap a good dose of this mixture on all sides. Next I use thin sliced bacon to wrap the entire backstrap. You want to use thin bacon, so that it fully cooks just as the internal temp is reaching medium rare 130 degrees. If you go with thick bacon it won’t get done and you’ll end up overcooking the backstrap. Start at one end of the strap and roll the bacon around overlapping each pass. Continue doing this down the length of the backstap, Be sure to overlap each new slice to help the bacon stay in place; you can also insert tooth pics to hold if needed. 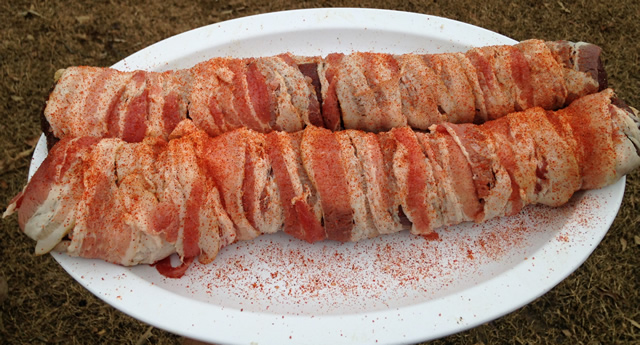 Season the outside of the bacon wrapped backstraps with a little Killer Hogs BBQ Rub for a little extra kick in the color department. At this point they’re ready for the smoker. For the cooking process you need a steady temperature of 275 degrees. You can use any smoker or grill set up for indirect cooking (build your fire on one side and cook on the opposite-cool- side.) Once the cooker is up to temperature add a chunk or two of pecan wood and place the backstraps on the cooking grate. It’s going to take about 1 -1 ½ hours of cooking but I highly recommend using an internal thermometer so you can keep an eye on the temp as it climbs. I use a thermoworks DOT thermometer just for monitoring internal temperature. You can check out the DOT thermometer here >> This is one cut of meat you don’t want to overcook. Backstrap is best cooked rare to medium rare; anything else is just ruining great cut! When the straps hit 120-125 they’re getting close to being done, and this is just the right time to apply a finishing glaze. I took a little inspiration from my Korean grilled short rib recipe and mixed up a quick sauce. Here’s the recipe: 1/2 cup Soy Sauce 1/4 cup Molasses 1/4 cup Rice Vinegar 2 TBPS Brown Sugar 2 TBPS Honey 4 gloves minced Garlic 1 TBPS minced Ginger Root 2 TBPS Sesame Oil 1 TBPS Sesame Seed 3 Green Onions finely chopped 1 Jalapeno Pepper – finely diced Combine these ingredients in a microwave safe bowl, and heat for 2 minutes in microwave on high. Stir and heat for another 1-2 minutes. Reserve some of the sauce for serving. When the backstraps hit 125, brush on the glaze and continue cooking until the internal reaches 130 degrees. Immediately remove the meat from the grill once the alarm sounds, and let them rest for 10 minutes. You’ll notice the bacon is fully cooked and brown on the outside and the inside is pink and a little firm. I guarantee it’s tender and juicy. I’ve had people swear that it’s not venison.